We’re taking a short break from the story in which Claire, with enthusiastic support from Maddie, is getting the cane in the office of our headmaster, in a novel approach to parent-teacher relations. But this is from some thing else I’ve been working on, and I thought you might like it. Continued next week!

While Kerem and I were talking something strange happened. A group of six women emerged from the stairs that led to the two stories above the terrace we sat at. They looked at us. A short, plump girl with a cheerful face and a snub nose stared quite openly at me. For the first time since my wife had died I found myself responding to a woman. It wasn’t that she was pretty, though she was. It was something about her attitude. Then the women bowed at us, gravely as men would, but mocking us, and left. There was laughter from the stairs, as they departed.

I stared after them in wonder, then looked at him. Kerem said, “Bran, that girl liked you. You’re exotic. And perhaps she recognised a rogue.”

“When I said I’d only been to a brothel in San Francisco, that wasn’t true, was it? It seems I’ve also come to one in Baku.”

Kerem smiled. We finished the champagne. “You’ve had a long journey. You’ll have no opportunities to exchange civilities with women where you’re going. So, when I go upstairs in a moment, I’d encourage you to come with me. You’d disappoint the snub-nosed girl if you chose someone else, but I’m sure she’d not grieve overmuch. Imran does not charge my family, or their guests.”

“If I do go up those stairs, what do I say, in the local tongue, to tell a girl she’s pretty?”

He shook his head and laughed, staring at the table. “I’m sure you’ll think of ways. There’s a universal language, and I expect you know it well enough.” He stood up. “Come.” 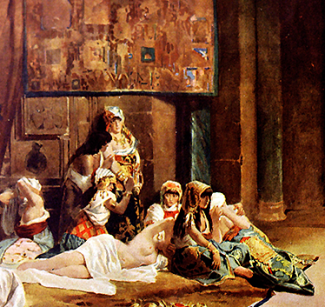 So I followed Kerem, climbing to a room with six beauties, not naked but wearing considerably less than on the terrace. It was a pretty place, not just because of them. There were paintings and tapestries of beautiful places and women, flowers growing and even a small fountain, though we were well above the ground. The air was cool and smelled of jasmine.

Kerem departed discreetly with a beautiful girl, who I guessed was Russian. They seemed to know and like each other well. The girl who had eyed me let her shawl fall away, partly, from her breasts. She smiled, complacently. So I pointed at myself, looking at another girl, paler, more slender, probably more beautiful. I said “Bran,” then looked interrogatively at her.

Then I took my complacent girl’s wrist. She stood immediately, and squirmed against me. I kissed her and she kissed me back. I’d heard that the whores of Europe don’t allow paying men to kiss them, but that rule seemed to hold no sway here. We broke the kiss, and stepped back. She put her forefinger between her breasts and said, “Nana.” Then she looked up at me, laughter glinting in her eyes. “Bran.”

So we left together. At the last second before we left that room I caught Ruxana’s eye. Whether she was playacting or not, her regret seemed real. So I said, “Ruxana,” and she joined us. Nana rolled her eyes but led the way. 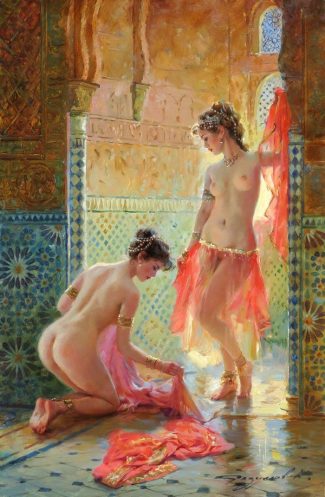 The room Nana took us to was large, with an enormous bed, am armchair and a padded table with a hole in it, whose use escapes me to this day. Even if we’d had a common language I wouldn’t have wasted time by asking.

Nana and Ruxana undressed and stood facing me, striking an elegant pose, then both turned around and bowed slightly, so I could admire their bottoms. I admired all of them very much.

They approached and undressed me then, and both knelt and kissed the visible sign of my admiration.

Nana stayed on her knees, occasionally taking me into her mouth while Ruxana took a basin of scented, oiled water, a brush and many towels, and began to wash me. I thanked the gods that I had washed myself vigorously in the hamman the previous evening, but Ruxana was even more thorough.