Yvain, not sure she wasn’t a mouse, met the Seigneur’s eyes. He stood above her where she knelt. He was smiling, but what caught her attention was not his eyes. His cock – she knew what it was called, at least – jutted towards her, pointing at where her breasts would be if she were standing.

She’d never seen one in that state before, not even Matteo, her groom. Her husband, she thought. Her adventures were making him seem further from her, smaller in her life. The Seigneur stood a step towards her, so that cock was almost touching the bridge of her nose. She found herself going cross-eyed. It was a large shaft, corrugated with veins, with a bulbous head.

She saw and felt the Seigneur put his hand on the back of her head. He did not hold or guide her. It was more like a caress, but she knew if she resisted that hand would be firmer in its grip and more insistent on controlling her movements. She heard him say, “You remember what Gisela showed you? What you are to do?”

“Then – when I say Now; not before – take me in your mouth slowly. We’re in no hurry. You pause once you’ve taken the head in your mouth, then slide yourself forward so it’s completely in you. You relax, so you don’t gag. If you gag, or I feel your teeth, Yvain, or you let me slip out of your mouth, or I’m not satisfied that that sucking hard enough, I shall cane you. Severely.” The hand on her head caressed her hir and scalp lightly when he threatened to cane her, and the cock somehow seemed to expend slightly, though she’d not have thought that was possible. She opened her mouth, and closed her eyes. Hew said, at last, “Now, girl.”

Yvain leaned forward and caught that bobbing head between her lips. She kissed it softly, as she might a friend’s new born baby, wanting to show him some of the tenderness she felt. The head of his cock in her mouth: she wanted to remember that moment. It was less dramatic than she’d expected, and yet there was one of her virginities flown. The head of his cock was an odd mix of hard and soft: rock hard in a way, but the skin seemed soft like a peach’s. 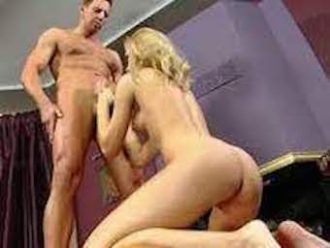 She smiled and pressed forward, feeling his hand caress the back of her head, fondly and without force. She pressed forward, taking more of the shaft. She raised herself a little on her knees, so she could take more letting it enter her throat. She closed her eyes and thought a running water, which always calmed her, and managed to relax despite this invasion.

She moved forward again, so the cock was entirely in her mouth and throat, and her nose was in his black pubic hair. He was washed – which Matteo would not have been – and she smelled only salt, a trace of neroli oil, and something she recognised as pleasantly masculine. It was the first time she had been close to an aroused man. Now she could hardly be closer. She kissed the based of his shaft, and then drew in her cheeks, sucking hard, and slowly moved her head back. She heard his gasp and knew that sound was tribute. She was doing right and well.

Her Seigneur breathed the words, “Good girl, Yvain,” and moved his feet further apart, so he was braced. Still moving slowly, Yvain inched her head forward, taking her lord into her once more.