I’m going to collar a girl in a few weeks’ time.

There are a few minor issues that have to be dealt with first, like her giving me enthusiastic consent. Which is half-given, but I consider that it’s still subject to conditions at present. But once those trifling formalities are over, she shall be given and wear my collar.

So what does that collar mean, when I give it to this very specific person? 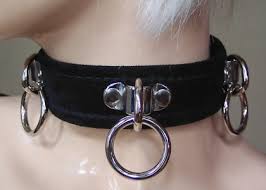 A standard slave collar. Note that the designer provided rings for three leashes! The Bible says you can’t serve two Masters. Obviously,  three’s all right though

The first thing it means is that I love her and I trust, to the state of knowledge, that she loves me. And I commit to her. I’m no longer looking. And whether she likes it or not, I consider it my duty, as a dom with a collared sub, to look after her, and to work to achieve her safety and happiness. She affirms the equivalent. We are a dominant and a submissive, and each of us is focussed on the other.

This is simple enough, and it’s the reciprocal aspect of a collar, the part that means roughly the same to the dominant and the submissive.

The second thing it means is that she’s my submissive. But that status, “my collared submissive”, can mean a range of things, on a continuum.

At one end of that scale it would mean she would address me as Master, and have to obey any command I give her, concerning any aspect of her life. I would have an absolute right to discipline her, for my pleasure or because she has displeased me. (The three things that I’m most likely to punish memorably for are self-destructive behaviour, which can include inaction, disobedience and disrespect other than playful cheekiness.

In that version of submission, she is my property. An owned girl.

At the other end of the continuum, it means she retains her own decision-making, independent of me for most of her life, but she is submissive to me in and around the bedroom. Her submission is sexual, and not anything else.

The rhetoric of lovers

These two styles aren’t in practice so different. There are some practical differences, but in reality the major difference is the intensity of the rhetoric.

All lovers use rhetoric when they speak to each other. Two people, having just fucked, may look each other in the eye and swear that they will love the other forever, till the day they die. 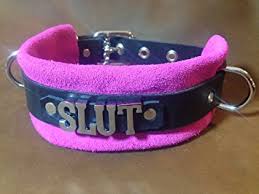 There are some tacky slave collars out there. This one could actually be worse than jazz…

In reality they may part within the year, because one of them eats mandarins in bed and the other wants to listen to jazz on the radio when they wake up in the morning.

Jazz would be a deal-breaker for me, by the way. I’d never swear undying love to someone who listened to jazz in the bedroom. Once I discovered that horrible jazz thing, it’d be a one-off, a one-night stand. Um, all right, this might be a digression.

But the fact that they parted doesn’t mean they were insincere when they swore undying love. And if you understood the rhetoric, it doesn’t even make what they said untrue. They were looking for words to express how enchanted and wonderful they felt, and they used those words.

The literal meaning of their words wasn’t the point; the meaning was the emotion they expressed.

So I might say to a submissive, “I own you; you are my property, to do with as I choose.” And she might say, “Oh god yes, I am yours, Master.” Then we sign a contract to that effect.

But if she feels bad in the relationship, and she no longer loves and respects me, she doesn’t really transgress that agreement if she leaves.

So in a sense, the rhetoric of ownership, of a collared submissive, really means: “I feel this passionate urge to be your dominant, to take and enjoy your submission, and I feel it very intensely. And I want to go on feeling it intensely, with you.”

It’s emotionally real. It’s never practically or legally real; a submissive cannot really give up direction and control over her life, except voluntarily while she wants to. 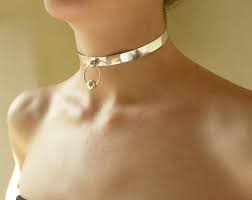 The day collar. Something that can be worn in public, with some discretion. I’ll be looking for something on these lines…

That means, if I say, “girl, take your clothes off and kneel”, I expect to get obedience.

But if I said, “you will tell your mother about us, so she understands that you are my submissive, and that if she has any requests of you she must direct them through me,” I expect to get, at least, discussion. Or a flat, “fuck off”.

So I see the gift and acceptance of the collar not as an end-point but at a stage in a process. A declaration of love and commitment, and presumption towards submission when I flash out my dominant side: those are good starting points.

23 thoughts on “What giving a collar means to me”