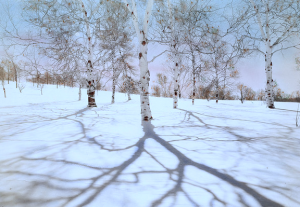 She looked thoughtful, then pleased. “Until I bleed.” Now Diane was happy again. She owned a tee-shirt that said: “The blood is the life”, quoting Dracula’s hapless little helper Renfield. She was getting back to vampirey ground, and territory she knew. The odd thing was that I was leading, but apart from having reading the Bram Stoker novel I didn’t know much about this stuff.

I’d seen a few vampire films, but I’d given vampires a miss after letting myself be dragged to Queen of the Damned, even though I’d seen Interview with a Vampire. No force on earth could drag me to another one. Anyway, Diane was interesting in ways that vampires weren’t.

I said, “That’s right. So. See this switch? You’re going to collect me another eleven pieces just like it.”

“You’re going to make a birch for me?”

“You’re going to prepare it for me. I want you look for pieces that are as thin and whippy as possible at the end. The twigs should be green and flexible. Strip the leaves off. Like this one. And see these little hard bits, like buds?”

“Those are the bits that should draw blood. So get pieces with as much of that as you like.”