Diane’s apartment was in a district where the council skimped on street lighting, so that few people noticed a man and woman walking together, even though the woman was pale, bosomy and she wore only a partially unbuttoned shirt. And canvas shoes. Men didn’t notice her, or politely ignored us. Only the old East European women saw her, and they stared, wasting their disapproval on Diane when it should have been directed at me.

But Diane was used to offending older women with what she wore, and how little there was of it. She was entirely unworried. She’d asked me one more question before we’d left her apartment, which was why the bottom of her shirt was also unbuttoned, the shirt-tails flapping near the tops of her thighs. One more button and she would be, as the Victorians would have said, quite undone.

So she asked no more questions. Instead she talked about the wet teenage vampires in Twilight, and how they were to real vampires roughly what Justin Bieber was to, oh, Kurt Cobain.

I wasn’t sure what she meant by “real vampires”, since there are no vampires and there’s never even been a good film featuring vampires which you could call “real” in the rock’n’roll sense of well-faked authenticity. Christopher Lee was probably best, but his Dracula was as camp as Adam West’s Batman; so was Gary Oldman, so was Bela Lugosi. The American efforts, from the Anne Rice movies to “Blacula”, are useless: not even funny. But she was amusing about the Vampire-lites in “Twilight”, and I didn’t argue. 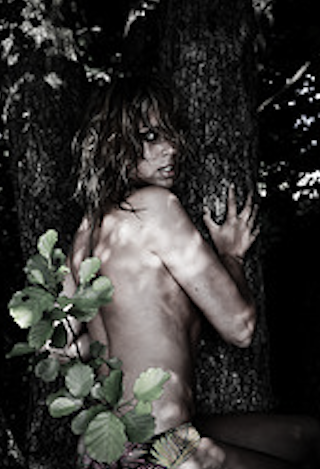 The other good thing about the local Council being poor was that the local park was under-lit, and no-one had yet thought to clear away the undergrowth in the little forest there, or to thin out the trees so that a single policeman with a torch could light up the whole area. This was still a proper little forest, overgrown, unlit except by moonlight. Dark deeds could be done.

I led Diane to the largest tree, which was still youngish and only about as thick as her waist. An ash tree. I’d led her to stand facing it, but she took another step forward, marching like a radio controlled toy. She was clowning, a little protest against my bossiness. So I pushed her forward and she grabbed at the trunk for support.

Then, her body against the ash, her arms around it, she said, “oh.”

I said, “stay there.” I tugged the shirt up and tied the tails at her back, round her waist. The tree had pale, smooth bark, with occasional felminine curves, cupolas and crevices; Diane, pale and naked from the waist down, seemed in the moonlight to be part of the tree, like Daphne.