I made Diane walk ahead of me, partly for her safety, and partly to remind her that her back was essentially naked, from just below her neck all the way down to her shoes. She knew that I was watching her walk, and that any other person who came along that path would have the same view as I had.

She looked around nervously once she’d passed through the first lit area. There was no-one around, but I didn’t want her to be certain of that. I smacked her thigh, hard but without ceremony, and told her to keep her eyes forward.

Diane only nodded in response, and kept walking. I considered punishing for not acknowledging the order. But that would distract her attention from her humiliation. Anyway, she obeyed me, looking straight ahead, her ripped shirt billowing behind her as she carried her bundle of switches to the place they would be used on her.

I could sense her tension rising as each step took her closer to the edge of the park and the more brightly-lit streets. We were in one of the darker areas on the path out of the park, approaching the last of the park’s lights before we reached the street. I said, “Stop.” 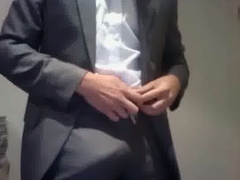 Diane stopped. She said nothing, and didn’t turn around. I said, “Feet apart, Diane,” and as she moved her feet I took my belt off.

It’s a thick belt, slightly too heavy to be worn with a suit. But I always have it with me, just as I always have condoms in my wallet. So Diane could hear the leather sliding through the hoops of my suit pants.

There’s a sort of sinister sussurus, leather against wool, speeding up as the leather is freed from the last couple of loops. She hadn’t heard that sound before, but she knew what it was.