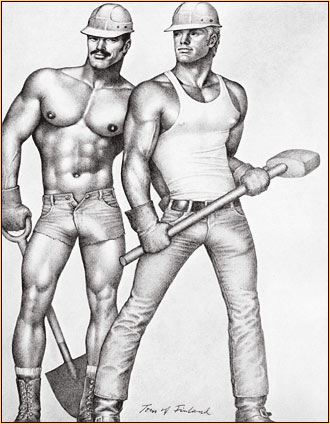 It’s nice that Finland is cool enough to give him his own series of commemorative stamps. And there’s a joke available about licking the rear of a Tom of Finland character that I’m not going to touch.

They get sticky when wet, too.

Anyway, this reminded me that years ago there was a cartoon series on the tellie, He-Man. Like He-Man’s powers, the show was terrible beyond belief.

But it was interesting that while nearly all cartoon superheroes have a slightly obsessive urge to name themselves after their gender – Superman, Wonder Woman, Batman, Catwoman, and so on – He-Man took it to the extreme. Both components of He-Man’s name insist that he’s male, and they don’t say anything else. 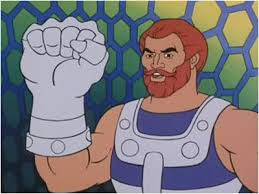 Fisto. Apparently there was another character in He-Man cartoons who was called Ram-Man. Maybe he was an Aries.

The other interesting thing about the He-Man universe is the most obvious and extreme of its homoerotic figures, someone whose special super-characteristic, and preferred practice, is way more perverse than anything Tom of Finland came up with.

I refer, of course, to Fisto.

That’s one amazing brachio-proctic fist of luurve he’s got there. And, arguably, fist of justice, so long as he only uses its special powers for good. With great fist comes great responsibility.