We went out for dinner, and I performed while Sal set me some tests. She needed to know that I was safe and sane, reasonably amusing, and that she fancied me. 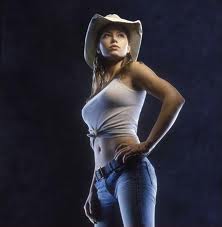 Yeah, the Texas girl look is kind of a cliche. But it works.

My test was much simpler, and she’d passed it the second I saw her. She wore tight jeans, which told me things that I liked about her shape, and a white cotton teeshirt with embroidery, that told me she had generous breasts. She had long blonde hair, a lop-sided grin and a great, dirty laugh. She wore a white and gold Stetson, and if I’d intended to start a relationship with her, I’d have ordered her to throw it on a fire once she was used to obeying orders.

But she didn’t want a relationship, and I just wanted to go back to her place and get her naked.

So I lay her face down on her whipping bench and secured her with chains. It was a padded whipping bench, with a hole for the submissive’s face, so they can breathe easily even when they can’t move. You can adjust the height, like a hospital bed. I whipped her with a multi-thonged flogger, but she showed every sign of enjoying harder strokes, so by the end I used a riding crop, not as hard as I could physically but as hard as I could bring myself to. I didn’t draw blood, but she got a good set of welts. She was black and blue in the morning, and we were both very proud.

Then I released her arms, pulled her back to the edge of the bench, lubed her ass, and buggered her. I’d said, when we outlined what we might like to happen, that I’d always wanted to take someone anally, as the first sexual contact. I think it was the fact that it seemed so … impolite that appealed to me. Anyway, she’d liked the idea, and so there she was, over a bench, well whipped, with a stranger’s cock up her ass.

We carried on fucking and hurting her body in places and in ways that she liked, until it was after two in the morning. We lay together talking, with her stroking my cock and me stroking her cunt. Sal told me a story about what her first Master had done to her the first time she’d disobeyed him. It was a very sexy story, and I certainly would have been hard in her hand if I’d had anything left.

But I was fucked out. I wasn’t going to get another erection until I’d had sleep and some down time. I had two fingers pressing up inside her, stroking slowly. I’d made her squirt a couple of times. So I was still keeping her happy, though that meant that she wasn’t ready to sleep.

She asked me to put another finger, a third finger, inside her.