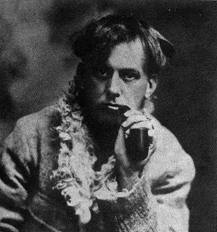 Aleistair Crowley has been largely forgotten (internet fame not being quite the same thing as fame). He was a supposed black magician in the early twentieth century, who the newspapers called “the wickedest man in the world”. He did his best to play up to the reputation.

Crowley was essentially an amusing charlatan, who harmed a few people more by carelessness rather than malice, and perhaps made up for that by showing some people an exciting time while entertaining millions more.

What strikes me as odd is that after the thrashing Crowley would present himself and order his submissives to bugger him.

It reminds me how conventional I am, really. If I let a submissive hitch on a strap-on, since people who have real penes aren’t part of my sex life, and shove it up my bum, I’d assume that while I was being anally penetrated I’d be doing something submissive.

Disclosure: I did once let a girl try to get a dildo up my bum, because being buggered by a girl seemed amusingly complicated, symbolically. But in practice it just hurt: there was nothing good about the feeling at all. Gay friends tell me it’s great, and I should give it another go. But I gave it a fair try, and it’s not for me. I pulled the plug, as it were, and I haven’t repeated the experiment. Well, there’s no law that says everybody has to like everything. I’m glad that women, and especially submissive women, mostly like different things than me.

But when Crowley had his submissive’s cock up his arse, he presumably felt that he was in charge. Perhaps he shouted commands: “Faster, you fool. Now slower. Don’t you dare come.” That sort of thing.

I’m still in Glasgow. I turned out 80 pages yesterday, and I’ve got a concentration headache. I’m still working.