I’m on the night train to Glasgow, with fighting, farting, shouting Neds in kilts and blankets. Last night I was up to all hours and all sorts of things. 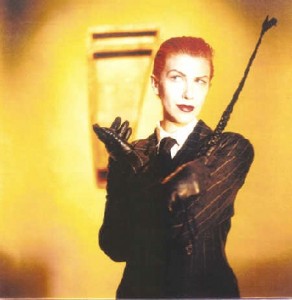 I was at a show where girls and boys wore nothing but cardboard and rags they’d acquired by tearing up suitcases on-stage. Then they picked up instruments and played and sang “Sweet Dreams Are Made of Thee-yisss”. It was Art, heigh ho, but lots of fun.

I finished up in a Chinese restaurant in Soho, though not Lee Ho Fook, and not infested by werewolves. Or any other customers at all. It was the small, bewitching hours. I had duck in plum sauce, and a beautiful slave girl with pink, white and black hair had long soup.

Long soup would be a good poetic term for oral sex, wouldn’t it?

We’d left the two pretty toolkit girls drinking cocktails in a homely little bar named after a parrot. I don’t think I could find that bar again. You can get lost in London. Lo-lo-lo-lo-lost. Loooooost. In London, lost.

Anyway, the point is that I’ll have to get back to Ana’s and Sa’afia’s story later. I need to do some work to make money, and then get some sleep.