A woman dom with a submissive man can suck his cock as part of keeping him in his submissive space. She can tell him that he’s being teased and tested, that he has to stay absolutely hard in her mouth, but he’s not allowed to come. Or else. Or she can say he has to come quickly, and get soft again, quickly, because he’s being “milked” to reduce his male energy and any tendency to forcefulness.

So a man can have his cock sucked by his dom and remain in submissive role.

If she demands that he get on his knees and do her, she receives his tongue and his attention as service. When he licks her, he’s being submissive. Why? Because they both say so. 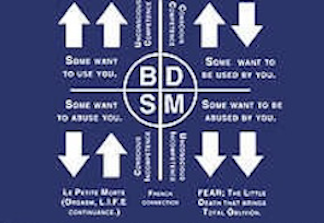 But if I licked – let’s say Sa’afia – I’d be thinking how I controlled her. I’d hold her down, I’d demand that she ask permission before she comes, and I’d let her wait and panic a bit before I gave that permission. I’d be dominant, and poor Sa’afia, with my lips and nose and tongue in her cunt, would be submissively under my control.

Whereas if she kneels while I stand, and takes my cock in her mouth, then we’ll be getting back to where I left the Probation Officer story.

I’ve finished one project. I’m going to Mostar, in Bosnia and Herzegovina be cause I’m due at a conference. Just observing, not doing anything. That’ll be less busy. Normal blogging should be resumed tomorrow.