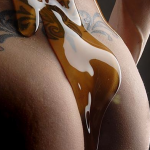 In a few days I’m going to Kipling country. It doesn’t exist. It didn’t even exist when Kipling wrote about it. Maybe it’s Rabindranath Tagore country. I don’t care enough about Vikram Seth, say, to make it his. Anyway, I’ll be a mutineer. II’ll be demanding more pork fat and fewer bullets. I’m flying there in a few days.

When I get there I’m going to the jungle. That’s a good thing to say you’re going to do, in a story or a song, but the fact is, I’ll be going into the jungle.

I’ll hiss at the snakes like they’re Victorian stage villains. Well, that’s what they are. Jimbo the Snake and his crony Sneaky Lurkee. They’re music hall creatures. Kipling was right about that, at least. 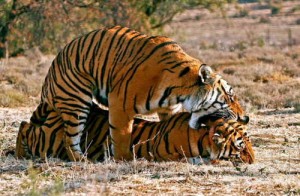 I’ll tell the tigers to come out because I can see them. And when they stalk out from the long grass, embarrassed and a bit awkward I’ll smack them fondly, and pretend that I really could see where they were. We’ll laugh about it.

If they’re girl tigers I’ll bite the backs of their necks, force them onto the ground with their rumps high and mount them, their tails and mine tucked between their hind legs. Later we’ll stagger apart, cut, scratched and bitten. They can fix all their wounds with a roll in the dust to stop the bleeding. It’ll take an infirmary for me.

I’ll be teaching the monkeys a new dance. One I learned from bonobos. It won’t be a sexual dance; monkeys are too young for that. Millions of years too young.

But the monkeys can wear those big fruits that they call tchinas on their heads. Tchinas are the shape and size of footballs; the skin is yellow and black and the flesh is pink and tastes a bit like banana.When they’ve pushed the tchina skins down over their eyes so they can’t see, the monkeys and me will hold hands, and circle and kick until we all fall over. Then we’ll eat the tchinas.

There’s a woman there waiting, with eyes like swamps, brown, variegated and limpidly liquid. I’m going to show her my heart, my arms, my cock, and then the ceiling fan of some hotel room. And then the floor. And afterwards she can watch the darkness from inside of the crook of my arm, when we’re exhausted.

In the morning then we’ll go crashing through the jungle, in a houda but no purdah (no veils at all for my girl, though she’ll want them), but only if the elephant is wild and he wants to wander about with us on his back. We’ll have to negotiate with him. Promising to pelt the monkeys with elephant shit while we’re on his back is worth half the fare, because elephants have a very coarse sense of humour. But you also need to decorate their foreheads with lotuses and crocuses. You might not expect elephants to be so vain, but they’re famous for it.

So I’m flying soon. I’m packing a riding crop and no underpants. I’m torn about taking a pith helmet, but I don’t want to look like a tourist.