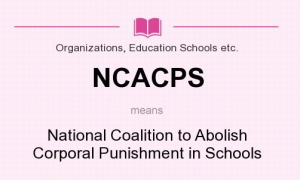 It’s been surprisingly hard to get rid of “corporal punishment” in schools.

That’s the last time I’m going to use the “corporal punishment” in this series of posts. It’s better to acknowledge openly that we’re talking about the beating of children with lengths of wood or strips of leather,

It’s mostly directed that the child’s hands or buttocks, usually by adults though sometimes other children are delegated to beat other students. Let’s call it “beating of school children”.

Beating children in schools should really have gone out in the 19th century, along with shoving children up chimneys or working them in mines (future posts will go into why that’s so). But the United Kingdom only abolished school beatings in the 1980s, nearly a century later.

Former British colonies and dominions like Canada, New Zealand and Australia, and most of the African Anglosphere also abolished it at about that time. But children and young people are still being beaten at school, quite legally, in quite a lot of Asia, in Islamic countries and, weirdly, in the United States. 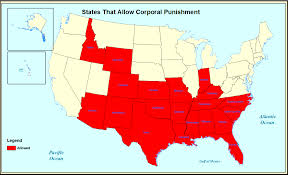 Those red-coloured States are the ones where child beating in schools is still legal.

There’s an interesting correlation between between blue, or Democrat States and red, Republican States. as the map indicates.

So if, as a loving parent, you felt your daughter should have the experience of having her arse beaten by someone you don’t know, unsupervised, possibly a male teacher, then you’d send that child to a school run by someone like the Christian Accelerated Education people. The Catholic schools would make sure the stranger who beat your child would be the same gender, as if that helped.

There’s one oddity about this, because many in the Christian right are fundamentalists, believing in Biblical inerrancy. And yet research on this group has found that most have never actually read the Bible.

“Spare the rod and spoil the child”: what’s that about?

Anyway, there’s that line, “spare the rod and spoil the child”. It gets quoted by people who think it’s God’s word endorsing beating children, and that it was probably something that Solomon said. (By the way, I’m not denying that the Bible says many creepy things about violence against children, including endorsing their sexual enslavement. I’m not arguing that the Bible isn’t nasty.)

The real story of where that line came from is quite different, and it’s illuminating on why defence of child beating is so often so very passionate.

“Spare the rod and spoil the child” is from a satirical poem by Samuel Butler (a 17th century poet, not the Victorian novelist), called Hudibras. It’s long but very funny.

In the Second Book, the hero’s in jail, since he tried to break up a bear-baiting match. He’s got a nice widow coming to visit him in jail. She’s taken with him, since he’s got money, fame and a certain amount of charm. But he’s disconcerted: he can’t get an erection.

So the widow gives him some advice. What he needs to get his sexual powers back, she says, is a good whipping. “Why not whipping?” she asks. “What medicine else can cure the fits/ Of lovers when they lose their wits?”

She explains that the god of sexual love, the boy-god Eros, is zestier if there’s a flogging in the air.

“Love’s a boy, by poets styled,/ So spare the rod and spoil the child.”

Those of us who think that there’s a fair level of unacknowledged sexual interest involved in a lot of the advocacy of child beatings may also think it’s kind of amusing that this favoured phrase isn’t a divine command but a sexually impatient woman’s endorsement of sexual whipping.

(Future posts in this series will be a tad less literary. But we’ve got to start somewhere.)