There hasn’t been much research on whether children get turned on by being spanked.

It’s not a research project you’d ever get past a university ethics committee, and no private research company would touch it because it’s one of those things that a lot of people don’t want to know. 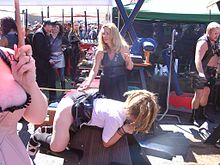 Ah, the Folsom Street Fair. And a woman dressed as a schoolgirl getting the cane. A memory for some becomes a fantasy for others.

So it’s not a question of, “is there a danger that in spanking or paddling children, they may find that it turns them on sexually?” We know that that happens, for a significant minority of people.

So the question we should be asking now (apart from asking someone to up-date that 1979 research), is not a factual one but an ethical one:

Is it right to impose a form of adult sexuality on non-consenting children?

And: does it make any difference if the adult concerned is unaware of the child’s possible sexual response to the spanking they’re experiencing, or the adult is in denial about it?

We’ll talk ethics in the next post in this series. Then we’ll start looking about the mechanisms: why is school or home beating of children likely to become sexual for some children, regardless of the adults’ intentions?