Drakes, or male ducks, have a penis up to half a metre (about a yard) long. But it’s spiral-shaped. If you sharpened the business end of a drake’s penis, you could use it to open wine bottles.

Similarly, female ducks have evolved a long corkscrew shaped vagina. If the drake has a very bright coat, and is charming, and holds his girlfriend firmly but not too painfully with his beak on her shoulder, and doesn’t try to push her head underwater and drown her (which drakes sometimes do, the brutes), then he gets to slide his unfeasibly long cock inside his duck’s vagina, and then slide it round, and round, and round, and round. And then round some more, and so on.

It takes longer than the average bird fuck, and it seems like fun. Quite sensual.

But there’s an interesting thing about the duck vagina. It’s a long spiral, but it comes equipped with side-alleys, pouches and dead ends. If a drake forces the duck (and not all drakes have the charm and manners of Cary Grant*) she can thwart him by wriggling very slightly, so that although she can’t stop him getting his end in, she can stop his cock getting anywhere near the duck equivalent of the cervix.

He won’t get such a good time, if she’s unwilling, and she won’t have his babies; his cock gets lost and astray, and never reaches the end. 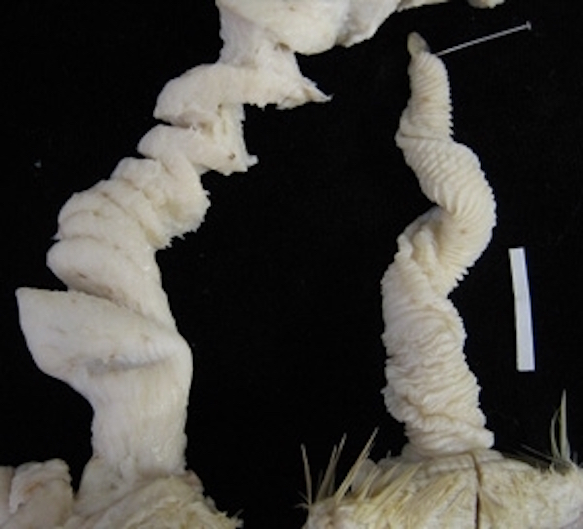 The picture shows two corkscrew things. The larger item on the left is a duck vagina. The item on the right is a drake penis.

* When I say that drakes don’t act like Cary Grant, I mean that it’s been estimated that 40% of all duck copulations involve forced sex. Drakes, by and large, are rapists and rotters. But Donald, I’m pleased to say, is in stir, getting counselling.

What I’d like you lovely, lively people to do, please is go here, and support Smutathon with your donation.