When I started this blog, I expected that I’d have a roughly equal balance of discussion posts and story-telling posts. In practice story-telling must make up at least 80% of the text.

I’ll remember some incident, and think, “it was funny, or hot, when I …” I’ll decide to tell the story. I expect, every time I start a story, that it’ll only take a post or two. But it always seems to turn out that these little incidents, which may have taken an evening or two in the living of them, turn out to be 20-part sagas, taking a month or so in the telling.

Some people write time quickly. Take my story about having trouble buying a tawse when I was in Scotland. Someone else might have written that story like this:

“So I was in Scotland, where they invented tawses, but I found it was damn near impossible to buy one anywhere, and wasn’t that just a little bit…  ironic?”

But me, I want to make jokes, talk about some sex shop owner’s caftan, and Scots goth girls, and all kinds of things. I’m at the slow end.

Tristram Shandy took a whole year to write the story of the first day of his life. Bertrand Russell pointed out that the longer tristram lived and wrote, at that rate, the more incomplete his autobiography would become. 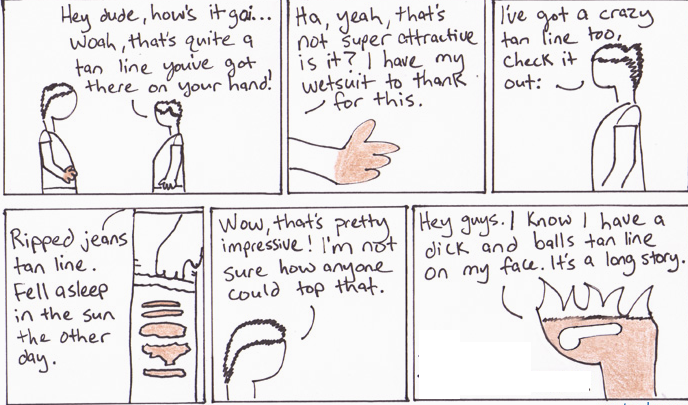 (Credits: The strip is from Wax Turds. I got rid of the punch time, which was, “ha ha, you’ve been topped”, because it’s better without it.)