“Shadowban” is a Twitter thing. It means that people can still post, so they think they’re still in the conversation. But other people can’t see their tweets, so they’re banned without knowing it.

I have the honour to be Shadowbanned myself, though my stuff is pretty humanist and harmless. But if you’re interested in following me, and finding some bad jokes, reverse sledging (where you say nice things about people), occasional political rants, plus the tolerable erotica, I’m @jaimemortimer . Follow me!

Something sexy from Sex Bog of Sorts (in Australia, a “sort” is a person you’d really want to fuck, so it’s a well named blog, antipodeally speaking):

An embellished reminiscence of posing for men’s mags, by Posy Churchgate:

From the wonderful May More, who gives you more, here’s evidence that Jesus is coming:

A story from Cousin Pons, about the healing power of good people having sex: 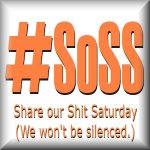