Scat singing is vocal improvisation with wordless, nonsense syllables. Scat singing lets singers do the equivalent of an instrumental solo, using their voice.

It’s a jazz thing. God, I loathe jazz. Maybe that’s not quite true. Sometimes jazz spends time being blues (Ella Fitzgerald, sometimes), and then I can put up with it. But the more like jazz it gets, the more I hate it.

And the jazziest thing of them all, even jazzier than bass solos, is scat singing. 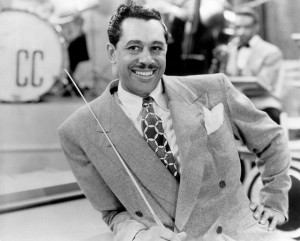 However, I will not hear a word against Cab Calloway.

You know when it’s coming: you’ve just had a long bit where someone goes squeak and squonk on the sax, and goes back to the ranks while the audience gives them a well-bred round of considered applause, and then the singer comes out looking as happy as the Persian cat that engulfed the moon, and begins:

You just know they plan to keep on doing that for longer than you can possibly stay in the same room as them. Death to scat. I really really will not do sexual play involving shit, but I think the singing might actually be worse.