I’m white, het and such. I’m sometimes mildly embarrassed by my complete failure to fancy men, but only in the sense that it’s a limitation and no one should have one of those. But I like what I like, sexually, and I’m not going to change it. In fact I can’t. If the Christian Right has made one contribution to the World of Knowledge, it’s that sexual orientation “therapies” don’t work.

I also sometimes think that there’s a significant number of people who I agree with on most things, who are likely to discount, or at least be suspicious of, any opinion I express on sexual orientation, race, etc. Because it comes from a position of het white male privilege.

It’s absolutely the case that I get privileged status from being born straight, white and male. I’m also lucky to be physically … well, not disabled. I mean, I need glasses and my hearing’s pretty shit, but basically I can get around and get by. There are people of colour who have more power and money than me, and there are women of any colour who also have that. But I’ve always had the freedom to know I’ll be ok. 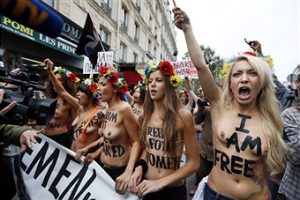 It’s not the most fun you can have while naked…

I won’t lose my home. I’ll always be able to afford food and water. At the moment I can even afford to fly round the world, drink champagne, and if I liked the stuff (I don’t) snort cocaine.

I can walk into a room full of rich, powerful white men, and pass. Not just by looking like them; I know how to act. I can make a deal. That’s very privileged, and it has a lot to do with being straight, white and male.

I don’t believe I’m being silenced by the presence of other voices. What’s changed is that I’m more likely to be called out for talking bullshit than my equivalent was, 100 years ago. There are more voices. Rupert Murdoch hates that reality, but I like it a lot.

Anyway, I was thinking about this because I read someone straight and white, like me, said they wanted to speak out and support Bi-Sexual Awareness Week, and they did, but they felt embarrassed about speaking out at all. I understand that feeling. But if we want to live in a better world, it’s wrong.

I don’t care if someone saying nasty things about bisexual people is het, exclusively gay or lesbian, asexual, or bisexual with a dash of self-hate. It’s the nasty that matters, not who they are.

Similarly, it doesn’t matter what someone’s privilege check points are, if they express support for bi-sexual awareness, and bi-sexual people. 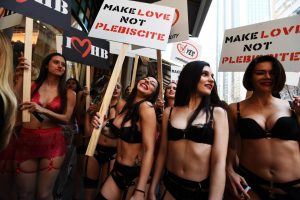 …sex and politics have always mixed. This is a demonstration in support of same-sex marriage in Australia. This male sex blogger, sadly, isn’t quite this photogenic

No movement, or group of people, has too many allies. Justice issues even need allies to the extent of including het white male sex-bloggers like me.

The same applies to supporting Rose McGowan and other women speaking out about sex predators in Hollywood, which is just another workplace. If something’s unacceptable in a Distribution Manager at a kitchen appliances firm, then it’s also unacceptable in a senior Hollywood bureaucrat.

So I joined the Friday 13 protest against Twitter for silencing Rose McGowan’s account. (She’s been reinstated, so good.) You can even be an ally by shutting the fuck up, sometimes. Life is full of ironies.

Vinceremos! And wankeremos! We can always do both.