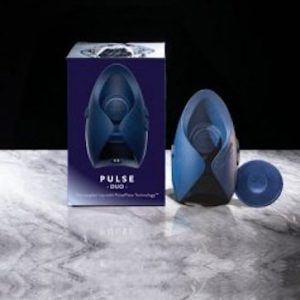 This review is based on tests with male use, female use and couple use.

The Pulse is a silicon toy, with that combines two vibrators, an outer one for female use, and an inner surface, with wings to surround the penis, for male use.

It has six vibration settings: 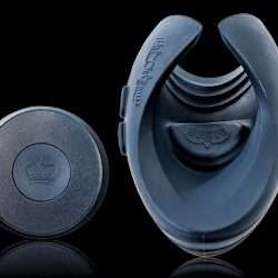 5 Three fast pulses and then one long pulse

I experimented with the six pulse/vibration speeds, and personally came to prefer setting 5, three fast pulses followed by one long pulse. You can choose another option, according to your preferences, which is part of the beauty of it.

The first time I used it I used lubricant (water-based, otherwise you will mar the surface). But I found on later trials that lubrication actually isn’t needed. It fits and slides along the shaft of the penis quite smoothly without lube.

I can report that it’s very easy to use, it feels great and it works! An A from me! 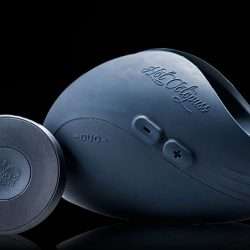 “For women, the business edge of this toy is the bulgy bit, at the other side of the winged part meant for men. You can hold it easily, and press it against bits of your body that are a bit … concave.

So I did, and it definitely feels good. One advantage women have with this toys the separate, supplied button that lets you select your pulse rate, for the surface you’re working with (or, if you like, that’s working on you), with a remote control button.

So you can vary your speed as you go, for example working up from the gentlest to its rumbliest settings.

One thing I found is that it lasts half an hour, starting from fully charged, at the rumblier settings. It doesn’t slow down gently; it just suddenly stops. For me, I timed it twice and it stopped at 31 minutes. Be aware of that if you really like to take your time.

But it really is a good, strong growly, rumbly toy. I don’t mean it’s noisy. It can’t be heard through a door (I tested). Rumbly and growly is what it feels like.

The male and female testers have played with the toy, and each has their favoured vibration speed and style. The next step is couple use.

We found that it works best if you don’t move about much. It’s easy for it to lose its place pressing against the vulva if you get energetic. So it’s a toy for intense concentration and lots of eye contact while only moving the hips slowly, and not from side to side.

For that it works very well, and that’s a good thing. Being stimulated strongly without moving, which is an unusual and good sensation.

I found that it has a psychological effect: you tend to focus on the other person. The stillness has its power.

Neither of us came, using it together, but it is (I think) more of a foreplay kind of toy when used in a twosome.

After the half-hour cut-off point, you can set the toy aside, go on and do penetration or whatever you want, and go for it.

We gave it an A-, docking it just half a notch for the difficulty keeping it in place during pre-intercourse. But that’s a minor quibble.

It’s an interesting toy that feels great, and allows you to be strongly stimulated while staying relatively still. Pressing together, eye to eye, while it moves both of you, is just a luxurious sensation.

It’s a great couples toy. As a solo-use toy it’s probably better for men than for women, though it works for both. It takes just a little getting used to, but then it delivers.