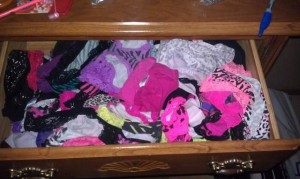 Maybe “panties” is an awkward word because it has an overtone of childishness. Panties, the word and not the item of clothing, seems to fit the world of little girls best, along with Hello Kitty and My Little Pony, and blaming the teddybear for finishing the milk.

Though My Little Pony is cool with me.

And so are littles, who create a submissive persona out of pink icing, sparkles and balloons and what you might call emotional lability, switching from tears to hand-clapping glee at the drop of a party hat. It can be exhausting but it’s also charming, and I’m always ready to help build a fort.

Still, “panties” isn’t an adult word. But the piece of clothing, on or off an adult woman, has huge sexual significance. Men know that if a woman wears them in front of them, there’s a good chance that sex is going to happen. If she takes them off or lets them be taken off (outside of ordinary domestic contexts), then sex is happening. There are fetishes about female underwear, but they don’t need a fetish. They’re the difference between sex and not-sex, and that means that they’re sexy in themselves. 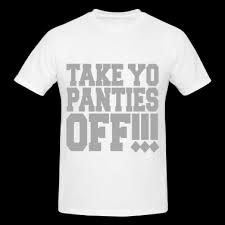 Never, ever, wear this tee-shirt if you want to get laid

So it might be the little-girl overtones of the word “panties” that makes it sound a bit creepy to some women. I know a woman who says the word always reminds her of someone heavy breathing down a phone: “panties arrrfffffff uh-herck ahhhhh panties”, and so on.

It’s not as if the word actually gets in the way. In practice. If I’m doing something bdsm-y they don’t stay on long anyway, and I’m not likely to use any particular word. I just smack her arse and say, “get those off. Now.” That works fine.

Still, a better word wouldn’t be a bad thing.