Svitlana was a healthy girl, about my height, firm but not skinny, and I wouldn’t have wanted to carry her far. But from the corridor to my bed would be easy. I pretended that carrying her was effortless.

“Suchyj Syn! Fuck!” She kicked, with calculated ineffectiveness, but didn’t roll out of my arms or hold onto the door. So I carried her inside, put one knee on my bed and lowered her carefully onto her back. 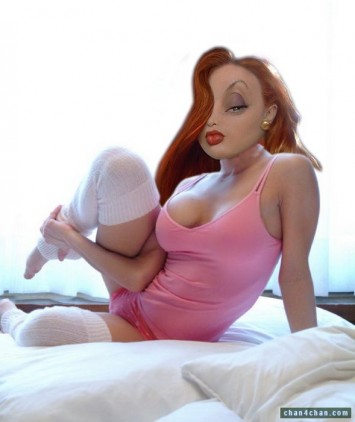 She sprawled, red hair over her face, her knees up and apart. She pulled down a pillow to support her back while she glowered up at me. I joined her on the bed, and started to pull the jerseys up past her stomach, and off her breasts. She raised her arms and lifted herself a little so I could get them over her head and off.

I tossed the jerseys onto the floor and began work on the buttons of her shirt. Svitlana had stopped pretending to defend her virtue.

I opened the shirt and pushed the vest up to her collar bones, exposing her breasts. I said, “Suchyj Syn?”

I pinched her right nipple, experimentally. She didn’t react. I frowned, and pinched it harder, and she sighed. Luxuriously. I’d thought so. I kept up the pressure while I said, “On the other hand, you said ‘fuck’. Don’t you have a Ukrainian word for that?”

“Yeah. It’s ‘fuck you’. Oh!” The gasp was because I’d taken her other nipple in my other hand, and squeezed both at once. She breathed, and her stomack muscles tightened spectacularly. “Oh, kurva.”

“Oh, kurva?” I put my hands on her arms, holding her down, and leaned down to kiss the right nipple, then the left. Then I bit, lightly, taking turns. Svitlana put her arms and legs around me. I was in a Svitlana-trap. It was nice. “Yeah. Fuck. Let’s.”