Svitlana seemed to be spent. But in that strange way that you sometimes know things that you haven’t been told, or shown, I knew that she needed more, and this time she didn’t want to be in control of her body. My fingers, still inside her, pushed up against the upper wall of her cunt. Svitlana grunted, a sleeping ship pushed by a tug. I pressed my thumb against her lips and bore down, finding her clit and hurting her. Svitlana opened her eyes and sighed. With my fingers pushing up against the spongy upper wall, and my thumb pushing down I could squeeze her cunt, and I did so, in a long, slow rhythm. Svitlana stretched, pressed her cunt hard against my hand and stayed with me. The good ship Svitlana was under way. Slowly.

I said, “Greedy girl.” I meant I was happy with her. She caught my eyes for a second, but said nothing. She closed her eyes to focus on something deep inside her.There was an extra reserve of lust in her, and she was connecting with it. She began to work with more urgency.

A few minutes later she was sweating with effort, every muscle in her body tight and relentlessly moving. My hand hurt, and I was getting cramp, but I stayed with her, pushing her hard.

Svitlana’s third scream was the loudest, and it shrilled the room until it died away in a wail of something like pain or despair, though it was neither of those things. She opened her eyes and looked at me in something like terror. I stroked her from inside one more time, fondly, and let her be still.

Svitlana subsided, lying back. Smugly half-smiling, she pulled me down onto her breasts and stroked my shoulders and the back of my head. She was supremely happy. So was I, though I was massaging the cramps pout of my right hand. 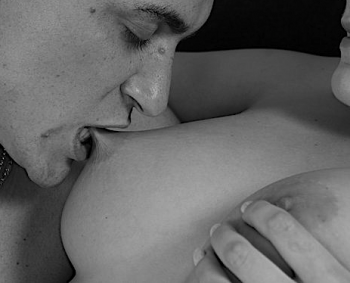 I kissed her breast and then bit her lightly when she tried to get her nipple further into my mouth. I suckled her, taking some more of her generous breast into my mouth. Svitlana pursed her lips, fearing that I was going to bite her harder. I bit her harder.

Her breath hissed, indrawn at the hurt, then she relaxed and moaned when I bit harder, grazing the nipple between my teeth.

I repeated with the other nipple, and Svitlana moved her hips, under me. She was ready to be fucked again.

But it was time to make her skin sing to her. I wanted her skin to burn like fire. I wanted her red, and I wanted to hear her whimper. With the right kind of pain, an awakening  hurt. I considered whether to use my belt, or just my hand.