Bridget leaned back against her plantlike lover, his penis, if that’s what it was, firmly held in her anus. She felt a deep love and affection for him. She knew that was partly because she was influenced by the psychotropic chemicals he exuded from his body, what he called his “pollen”. At the same time he’d been a skilled and considerate lover, and that told her good things about his nature.

Though she had to admit her asshole was a little sore from his vigorous thrusts as they closed on their respective orgasms, she was disappointed when at last, and slowly, he with drew from her. 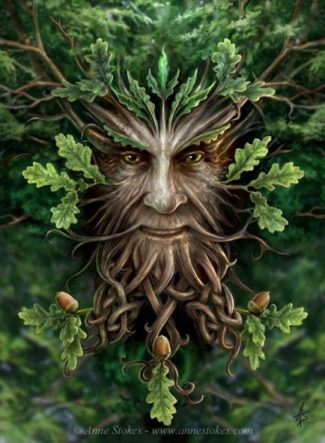 At last, though, she was no longer taken. He reached for her shoulder and helped her turn so she could look at him. He was an extraordinary being. His skin was dark green bark, his hair was leaves, and although the lines of his body and face were manlike, he was made of living, animate wood. His beard was tightly knotted, flexible twigs.

She touched his face. He was oddly soft, for a man of wood. He smiled at her. “I do not often court mortal women quite so abruptly. But I wanted you, on sight.”

She grinned at him. “My arse is still sore, you abrupt bastard.”

He looked concerned. “I’d hoped to bring you pleasure. Not pain.”

“You did. Pleasure, I mean. I was teasing you. My arse is sore in a good way. Oh!” She remembered something. “You spanked me! You can’t spank me and pretend you didn’t want to hurt me!”

“I felt you wanting it.” He looked up then, and saw Ojastara looking at the pair of them, smiling benignly. “Cousin, I have never had such a gift. May I keep her?”

Ojastara said, “That’s entirely up to the gift, now. I only introduced you. She is not mine.”

Only a short time ago Bridget would have been hurt, if Ojastara had said she didn’t belong to her. Instead she looked at the Green Man. “Jack, if you’ll have me – often! – I’ll stay with you. I’ll willingly be yours. If you’ll -“

“I cannot be yours, little mortal. I’m an elemental; it isn’t possible. But your life will seem all too brief to me. I promise to keep you and love you as long as you live.”

“Then” Bridget pushed her owner back, onto his back. He was immensely strong, she knew, and he was humouring her, as she might ‘lose’ a wrestling match with a child. The protuberance that had been in her arse was clean, now, and gleaming. She lowered her lips to it. “I wonder how sensitive this is?” 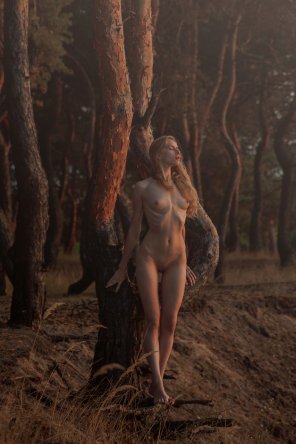 Jack said nothing, but the protuberance oozed sap, and then a sticky substance that tasted faintly of something woody, but nourishing. As she licked and sucked at her strange new lover, his hands fell to the ground, and the fingers seemed to dig deep into the earth. The protuberance grew, and it streamed as she sucked, the fluid viscous and faintly sweet.

He placed a bony, woody knee between her thighs, and she rode it, pleasuring herself as she pleasured him. At last she seemed to be back in that shining, fuzzy cloud, high above the world.

Jack came in her mouth at last, releasing something nutty and faintly sweet. She swallowed, and wondered if she would ever need any other kind of sustenance again.

But his great inflexible hand pressed down on her buttocks, so that she pressed closer, tighter to his knee and thigh, soft bark against sensitive womanly skin. And she made the first high-pitched peep, of the sound that seemed to be her new orgasm noise. There were many more before the need and greed of her cunt at last allowed her to relax and rest.

When she could look around again she saw that Ojastara and her foxes had gone. But she did not feel abandoned, in this new life. Jack said to her, “You’re my Queen now. Queen of April. Or possibly the May. Usually a goddess takes this role. So you must be a goddess too.”

Jack stood, and extended his strange hand. Bridget took it and rose. He said, “You’ve become a goddess. Whatever the season was, you’ve just brought the Spring. That was strong, and good. I’ll have to try very hard to make you immortal. With – pardon, I don’t usually work by human manners – with your consent, of course.”

Bridget remembered that hers was a goddess’s name. An old one. Perhaps that was more than coincidence. She said, “You may make me immortal, fine sir, if you please.”