Bridget waited on her hands and knees, her bottom arched up, proffered and offered. Behind her she heard the door of the cottage open, and a male sigh of pleasured surprise.

Seconds later, she felt hard hands on her shoulders, pushing her down so her face and breasts pressed against the grass. A voice that seemed deep but oddly constricted, said, presumably to Ojastara, not to her, “This is a thoughtful gift, Vetter.”

Bridget thought. “Vetter” meant “cousin” in some languages, and probably meant it once in English, before French influences entered the language. Could Ojastara somehow be a relative of this being? But she forgot questions of philology, because the voice addressed her. “You are very beautiful, little human. My mortal morsel.” She felt his thighs, hard as teak, pressing at her softer thighs and buttocks, and something, also hard, pressed protuberantly against her asshole.

She thought about that hardness entering her without lubrication, and whimpered. But the end of that protuberance began to flow, and it entered her, somehow exuding its own slippery gel. She looked down, for the first time, at the hands and forearms that pressed her down. They were solid, without fat, and the striations were neither muscles nor veins. They were a dark green colour. What, she thought, on earth am I fucking? 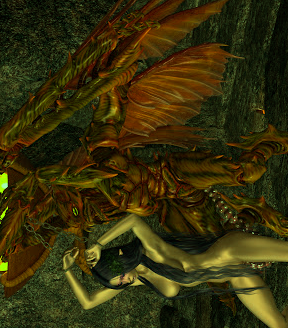 The voice said, “It’s late to name myself. But your invitation was too strong, little one. I am the Green Man. I’ve been on this world far longer than humans, but I welcomed you when you arrived. Recently, I mean about four hundred years ago, which is a long time ago for you, and yesterday for me, they gave me a name: Jack in the Green. You may call me Jack.”

“Well, you are welcome to fuck me, Jack. Though you’re like nothing I’ve ever seen before. Or… felt.”

“I’m sorry about that, a little. When I saw you I desired you. And when I’m in a state of desire, I exude … Well, think of it as like pollen. But I exude desire, and you feel it too. So you desire me very much, but you didn’t exactly choose to desire me. I think. Anyway, we want each other, and I’m afraid I’ll have to leave pollen ethics to human thinkers. Jacks in the Green don’t have philosophy. We don’t have politics, either. That’s for you beautiful mortals.”

And he began to move, deliciously, in her ass, taking care not to to hurt. Bridget knew, in a far-away part of her mind, that the pleasure she felt was also partly derived from the chemicals he released. But it was such intense pleasure, and she began to rock back on him, so that she was fucking him, and doing so hard and fast.

Then he held her, one hand on her shoulders, and took control again, fucking her very slowly. Bridget’s world seemed to shimmer, as if their mutual pleasure was somehow visible, like a shining cloud surrounding them both. She turned her head and bit that hard forearm. There was a very faint print from her teeth, and he grunted, not in pain. He reached one hand back and smacked her bottom, six times. His hand was utterly hard, but he was careful not to hurt her, or not much. Then he stopped her spanking and began to fuck her a little harder, a little deeper.

Bridget gasped. she was being taken on a high, hormonal path, as if she was flying, with his hard tube in her ass. She gasped in air, as she could feel her climax build, relentless. Usually she came noisily, guttural or a scream, but deafening for her poor lover. But she could only squeak. Her orgasm came in sharp jabs of pleasure, over and over, possibly for four hundred years, or a day.

At last she stopped, and relaxed against him. She felt immensely happy and fond. She hoped he would let her up, in a while, so she could see his face.