I live on land stolen from the Darug and Gundungurra Nations. 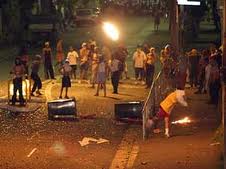 I hope Australia confronts its past soon and comes to a treaty with the Aboriginal nations.

That treaty, I know, won’t involve full restitution, the “give it back” option. But it will involve political recognition of Aboriginal voices.

It’ll involve recognition of certain traditional hunting and gathering rights. And so on. And serious, non-bullshit government-driven moves to reduce the differences in education, health, imprisonment rates and life expectancy.

Anyway, Australia hasn’t even started its first step. In a way, Australia has been very lucky in its image, with its beaches and maybe the GLBTQ Mardi Gras makes the place look more inclusive than it really is.

I remember the horror with which the rest of the world viewed Apartheid-era South Africa. If people looked Australia with a cold eye, they’d think, Fuck, that’s horrifying: some of the conditions here are worse than the apartheid era. I’ve been through places in Australia that looked a lot worse than photos I’ve seen of apartheid-era Soweto.

I’m not an expert. I just know that a nearby country, New Zealand, sorted this out in 1840, with Te Tiriti o Waitangi/Treaty of Waitangi. Which was imperfect in many ways, but it was a crucial start. As a living document it’s being developed all the time to fit with the modern world, and post-colonial ideas of justice. 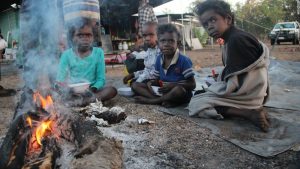 When the day comes, and there’s some sort of treaty with Aboriginal support, I’ll be proud to become an Australian citizen.

Until then I can’t join “Team Australia”. It’s just a conscience thing.

I’d like to think that improvement will come when the current racist, incompetent, corrupt shambles currently in government in Australia gets the arse. Which will happen as soon as they have an election, and they can’t put that off much longer.

But the hopes I have for Labor are very, very low and muted.

Anyway, nobody in their right mind cares whether I join Team Australia or not, I know. It’s just me.

Still… shout out to anyone else in the same position. And muted hopes for a less racist Australia after the election.