I’ve relaxed, in the middle of Ireland.

I’m in a town called Roscrea. I chose it because it’s as close as I could find any accommodation to tiny Dunkerrin, where my ancestors, Jeremiah and Mary Mortimer, died and are buried.

I know: Jeremiah Mortimer sounds like an old codger in The Simpsons. I can’t help that.

His son, who came to the South Pacific and sired a hell of a lot of people, was called Darby. By the way, the name “Darby” is a fairly common Irish first name. Sean Connery plays a Darby in his first film, Darby and the Little People. You should see it because there’s a bit where Connery has to sing: comedy gold! Anyway, the name Darby is a sort of slang version of Jeremiah, like Jack is a slang version of John. 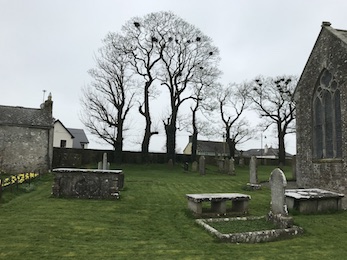 House of Mortimer (somewhere here, about six feet under this ground)

Anyway, Jeremiah and Mary couldn’t have afforded a headstone, so they’d have had a wooden cross at best. That’s long gone. I’d hoped to buy a mess of poitin, and pour some on the grave, one way or the other. But that was not to be.

But here’s a picture of the last resting place of the Mortimers who didn’t go to the South Pacific and become my ancestors.

There’s not much in Dunkerrin, though the churchyard is pretty. But I’ve been looking about the town of Roscrea, which unexpectedly turns out to have structures that were built in the tenth century, to keep Vikings away, and in the twelfth century when the Normans, having conquered England, decided to invade and occupy Ireland too. So: history! It’s all over the place here. 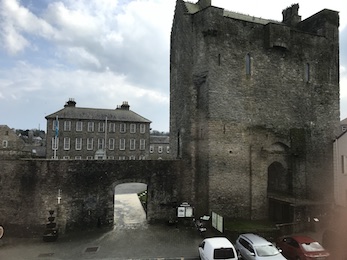 For example, this is literally the view from the window of my hotel room. It’s a Norman castle, twelfth century, That house in the middle, clashing with everything around it, was built in the eighteenth century by a family who got rich occupying Ireland when Oliver Cromwell went over and did his bit.

Cromwell’s bit for Ireland consisted of burning, murdering, raping, smashing and looting. Ah well, it’s a lovely house, truth to tell, but on style grounds, if nothing else, it really, really doesn’t belong in the middle of the ruins of a Norman castle.

Anyway, I’ve got peace of mind at the moment, and there’s a historical novel I finished a few years ago. Then I realised it has too many characters, and its climactic scene is in the middle, and it should be at the end. It needs serious repair. But I got taken up by other, more immediate, projects, including two other novels and a non-fiction book, and I shelved the flawed historical novel. Now I’m taking it off the shelf, with a fresh mind.

So if anyone needs me, I’ll be tapping my keyboard in the bar of The White House, Roscrea. I’ll be drinkin’ Guinness, and if you pop by I’ll be buyin’.

6 thoughts on “I begin my new novel (again)”