Raylene’s hips fell, and began to writhe, with each of her next four strokes. The impact of the razor strop across her buttocks would set her whole body in motion while she tried to shake off some of the heat. Eventually she’d be able to keep still, back under her own control. That meant being under my control, as we both understood.

She’d arch her ass back up, now well striped and mostly a bright red, waiting for and inviting the next stroke. It was a primitive, immensely sexual dance. I was the dancing master, and with the razor strop in my hand I could make her writhe harder, or longer, as I chose. Raylene, getting the strap, was my beautiful puppet.

She said, “Six, thank you, sir!” Her voice had been getting higher as she’d called out each stroke. This last count was little more than a breathy squeak. Raylene had shut her eyes tight, all her concentration on riding the pain, and forcing herself to keep still for me.

I put the strop down and stepped behind her, putting my hands on her hips. I drew her back so that her ass was against my groin. She could feel the hardness of my cock, and then pressed herself closer. I leaned forward. She breathed out: “Hahhhhh.” 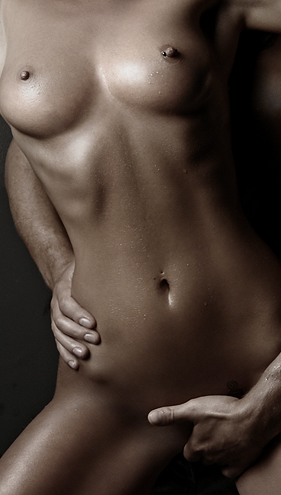 I leaned down and licked her spine and then kissed it. “Yeah.” I pushed my hips forward slightly, and Raylene rode that movement, then pushed back. We could have done this for a few more seconds, and I’d unzip, and we’d be fucking. But I said, “How do you feel?”

“Chances are.” I reached round her right thigh and lightly smacked her lower belly, then slid two fingers inside her cunt. She was wet indeed. She made a stricken noise as though I’d hurt her and jerked her ass forward, trying to get my fingers deeper inside her.

I stroked her while her cunt roiled, sweetly soaked, on my fingers. “You aren’t allowed to come, Raylene. Not yet.” There was a protest sound from her, and I smacked the side of her ass, left-handed. But I’d have to move on, if I didn’t want her to come. “Now that’s your first six, Raylene. There’s four more to go, four lots of six. Yeah? We’re going to stop after each six to make sure you’re okay. Can you manage?”

“It hurts, Jaime. Ooohh fuck it hurts. But I think I can. Er, manage.”

“Then that’s a good girl.” I stepped back and picked up the strop again. “Now keep still.”