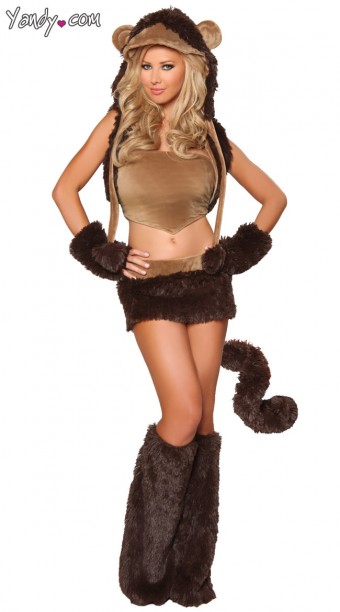 This, apparently, is a Sexy Monkey costume. I’m not sure that real monkeys would recognise it.

Someone just found this blog by typing this into a search engine: نساء سس مع قرود.

Which led me to wondering how the guy (we’ll assume it’s a guy, shall we?) who typed that got directed to my blog.

I’ve never posted anything that catered for his taste. I’m not into humans having sex with animals. Not just “not interested”;  I hate disapproving of things, but I disapprove of people fucking animals, or setting things up so the animal has to fuck a human.

If I was arguing the case against bestiality I’d say it’s wrong because it’s non-consensual, since animals can’t consent. (Ah-hah! Someone could say: you reckon animals consent to be killed and eaten?)

Then I’d say it tends to be cruel. (And someone could work out some arrangement in which the animal was neither hurt nor frightened, and the human was consenting.)

And then I’d fall back on the yuck factor. Bestiality squicks me. That’s no basis for making law and policy (plenty of people are still squicked by sex between men), so I don’t have a very strong case. Still, I can do what I like, and not do what I don’t like, on my own blog.

Anyway, I guess he found one of my posts about bonobos, which would have included the words “monkeys”, at least as in “bonobos are not monkeys”, “sex” and “woman”. And I hope he also found complete satisfaction.