I grew up in one of those places where you take your shirt off and go to the beach if the temperature gets up to 18 degrees. And where you’re a piker if you don’t go for a swim, in the ocean, on mid-winter’s day.

So I know that people died in Hurricane Sandy, and I’m not underestimating that, but still, the human truth is that when I saw pictures of the winds and the huge waves, and the lights going out, I thought, “That looks like fun! I’d love to be out in that!” 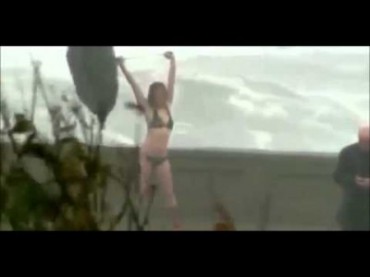 I was watching tv coverage of the aftermath, and in the background of one of the shots there was a girl at the stormy seaside, in a bikini, with a busted umbrella. The camera operator didn’t notice her and they just panned on. She was only on-screen for a couple of seconds.

But if ever there was a right response to something as solemn as a natural disaster, that was it. I’m really surprised that she doesn’t seem to have become more of an internet thing, because I’d love to know the rest of the story.

Anyway, whoever the hell you are, bikini in the storm girl, salute to you.