I was talking about teacher/schoolgirl stories and roleplays. I mentioned that I’d learned how to go deeper and darker, as a dom, than I’d ever been before, by playing that game. It’s a silly scenario, but it did turn out to have more power than I expected.

Here’s the story: (an excerpt from a book I’m trying to sell, as it happens):

The message was from Chloe, inviting me to visit. It was odd she hadn’t called my mobile. I supposed she’d wanted to leave a message without talking to me. There was something odd in her tone. She sounded very earnest. She didn’t answer, on either phone, when I called her back.

So I drove round and warily walked the path to her room. Chloe must have heard my approach, because the door was open for me, despite the cold. She sat, an extraordinary sight, on a wooden chair she must have borrowed from the elderly couple she was renting from. 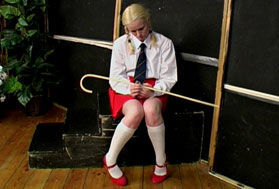 She wore a white shirt, top buttons undone, and a tie with bottle green and emerald green stripes. The blazer was green with a shield and a Latin motto; hardship led, as it so often does, to the stars. The skirt was bottle green, pleated, and tiny. I stared stupidly at her.

Chloe said nothing, but passed me an envelope she’d been holding in both hands.

I took it, and she placed her hands on her head, fingers interlaced.

The envelope contained a folded note in Courier font:

Chloe Sendak, the bearer of this note, has been late for school three times this week despite repeated warnings. She had been caught vandalising school property and stealing from other girls. Worse, she has made up an extremely improper poem about poor “Chalky” Carstairs. I have spoken to Chloe about her misconduct but she responded quite insolently. I have referred her to you because of your reputation for strictness. This girl requires firm corporal punishment on the bare buttocks, though you have my consent to remove her clothing altogether. Please punish Chloe extremely severely, and then keep her in overnight.

Rowena Laforge didn’t exist, as far as I knew, but she’d signed her name in spidery green ink.