So I’ve been writing about how the schoolgirl spanking fantasy is darker than we generally think. So if I were a completely politically cool kind of guy, then I wouldn’t play that game, or write it.

But if I find myself in a new relationship, the chances are that after a while I’ll take that girl downtown on a shopping expedition. Shoe shopping with a woman I’m interested in is always a good afternoon, because although I don’t actually care about shoes – the idea that a pair of shoes can be sexy is just mystifying to me – you learn a lot about her and her tastes, and that’s worth it. Then we might go shopping for things with sexual applications.

And if she doesn’t already own the little tartan pleated skirt, then we’ll go and find one and get it fitted. With a blouse. And matching tie. 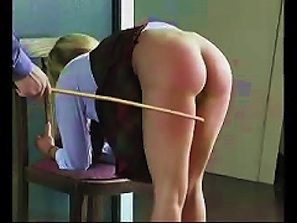 A little tartan skirt doesn’t take much fitting, but I go to a fetish shop where they know that girls who get bought pleated skirts by men in black are girls who have to raise the back of that skirt and bend over for discipline, followed by the consolations of cock.

The two women who run the place are quite capable of dropping a casual remark about how my girl will really have to behave herself while she’s wearing that skirt.

The girl can either take that as sisterly sympathy and submissives-union solidarity, or be pinkly embarrassed that her secret is out. Both are fun. Awkward fun. One of the best kinds. So I go there to have a girl fitted. They do fantastic corsets, too.

I haven’t actually done any role-playing for years, so my version of “schoolgirl punishment” is usually related to something in the submissive’s real life, rather than her being late for some imaginary school, or having been cheeky to an imaginary teacher. Instead I’ll deal with things involving money management, or career, or some task I’ve set her.

Whether it’s role-playing or reality, it still brings us to a pretty girl in a little skirt bending over a desk and waiting, hoping I’ll go easy on her, and knowing she’d be disappointed if I did. But reality, discipline that really matters and is intended to change real behaviour, is not just more useful than role-playing games, it’s much hotter.

I’ll talk about that tomorrow.