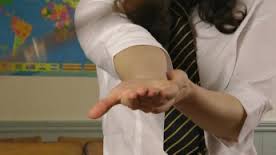 She put her hands out, palms up. They shook. I was shaky too. It occurred to me that Mr Mortimer hadn’t given a direct order. I’d softened it to a suggestion, so that if Chloe complied it was through choice, not obedience. Avoiding giving orders was part of the sexual politics I’d worked out, to be a dom and a pro-feminist guy.

But this was only a game; none of it was real. So they wouldn’t be real orders. And Chloe had initiated the game anyway. I decided to think about it later and get out of Mr Mortimer’s way.

He said, “Good girl. See, you can be a good girl.” Chloe smiled. I remembered that six weeks ago she’d asked me if she was my good girl. It had been a joke and not a joke.

Mr Mortimer said, “I’m going to give you the strap, Miss Sendak. Keep your hands out straight.” Now it was an order, but Chloe already had her hands out. She couldn’t enact her obedience. I remembered something else from the texts.

Mr Mortimer tried again. “And thank me for your lesson, Miss Sendak, each time I strap you. Say, ‘One, thank you, sir, Two, thank you, sir’. And so on. Got that?”