I opened Chloe’s desk drawer. There I found a long and heavy leather strap, three inches wide and nearly five feet long. There was a buckle at one end, but it was too big to have been a belt. Chloe later told me it had been part of an old suitcase.

The drawer also contained a wooden hairbrush and a heavy wooden ruler, and a jar of something that said on the lid that it was Dubbin. I assumed Dubbin must be lubricant, Chloe for the buggering of. Ignorant sod that I was.

Chloe had collected these items from her parent’s home, along with her old school uniform. She’d worn that uniform in earnest just five years earlier. Somehow, in the intervening time, it had turned into a sexual costume. It was a self-mocking costume, like a naughty nurse outfit or a French maid’s costume. But once all the layers of irony had been duly acknowledged, she still looked sexy. 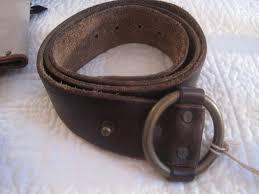 I picked up the belt. I’d only hand spanked Chloe, apart from a couple of occasions I’d used the back of her hairbrush. A strap seemed much more serious.

I folded it and hit my palm experimentally. It gave a slow and heavy impact, more of a thud than a sting. And a satisfying clap.

Chloe winced. I supposed she must have already tested the leather on her leg, to see how it would feel.