Chloe stood and faced me, still with her hands on her head. I wanted to step out of role to check that she was all right, that her consent was real, to reassure her. But that would only be about reassuring me. Chloe had shown me what she wanted, she’d taken a brave risk, relying on my response, and so I swallowed my doubts and tried to be worthy of her. 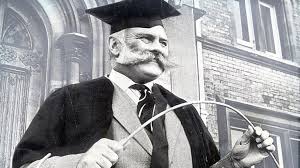 Yeah, I felt ridiculous. It was like I was channelling this. (I think this is a British music-hall comedian called Jimmy Edwards, by the way.)

Mr Mortimer the strict teacher might be ludicrous, but I could be him, and he could do this. He said, “Well, Miss Sendak, Miss – what the hell was her name? – Laffers or something says that you have been a Very Naughty Girl.”

Mr Mortimer also felt slightly silly, but he did have an erection.

He realised that he did have a script for this game. There were any number of literary sources. He said, “I think you’ll find, young lady, that you’ll think twice before you say that again.”

“Hah.” Chloe put her tongue out.

If I were not already in love with her, I’d have fallen at that moment. I wanted to multiply into many men, like Krishna with the Gopi girls, to fuck her in every way simultaneously. I wanted to whip her mercilessly and caress her gently. I wanted us to dissolve in mist and merge. She was my fellow pervert, she was brave, beautiful, clever and generous.

And, of course, she was as cute as a baby panda, if one were to put its hands on its head and poke its tongue out.