Anyway, here are some more images of the Penitent Magdalena, who Medieval Christians decided was a sex worker, which for various reasons is highly improbable, even if you accept the Bible as a reliable source for … well, anything, really. She is supposed to have spent the years after Jesus’ death living in a cave and whipping herself, when the desire took her. Er, the desire to purify herself. But see the fourth of today’s images. 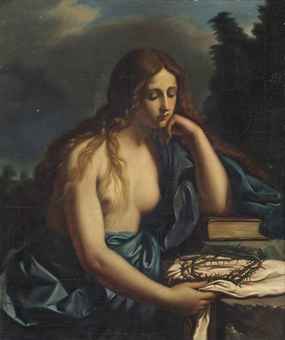 1  Here’s Mary Magdalena with a whip of thorns. (It’s a coiled whip, not Jesus’ crown of thorns. If the crown of thorns had been that big it would have slipped down past his ears and hung round his neck, causing embarrassment all round.) She contemplates it with a certain solemn anticipation.

She’s bared her breasts (1) so she can more effectively lash her own back and (2) the artist can paint some very pleasant tits.

The artist is Giovanni Francesco.

Or at least the original was. This is a copy made by another, unknown artist, for display in some Italian piazza. I think the image is a little too … distracting to have been used in a church. 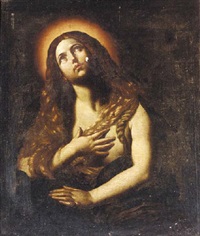 2 Here’s one by Guido Reni, who may be my favourite Italian Renaissance painter. This is an image in which Magdalena’s hand is holding a swatch of her own hair, which looks like a whip, though when you look closer you see there isn’t a whip there. (Other Italian painters did the same thing, with Magdalena.)

But the bared breasts and the sensuous expression echo the pose and the emotional and sexual feeling of the more explicit paintings where Magdalena’s whip is shown. 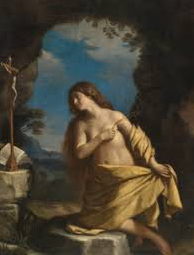 3. In this image she’s in mid-whipping, stripped to the waist. Note the eyes focussed on the image of her Master, the little Jesus on a crucifix.

In this image she’s stripped to the waist, though the artist didn’t have the nerve to paint her saintly breasts. Instead we get her arm wielding the little scourge.

The artist is Giovanni Barbieri, known as “Guercino”, I’m afraid that in my humble opinion he isn’t really very good. 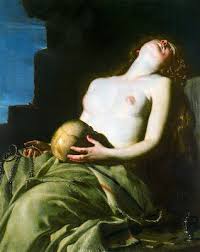 4  This one exemplified the way that artists liked to use Maria Magdalena. She’s a religious figure and also a sexual one.

In a way the penitent Magdalene hearkens back to the ancient Greek and Roman flagellation cults, with that mixture of “spiritual” setting, extreme emotional arousal, and sexual arousal, which is found in a number of Christian saints. Here she is in a state of ecstasy, which you could call religious or you could call mid-orgasmic.

It looks like an orgasm, a good one, to me.

Or, if you think (as I do) that older kinds of religion are being mixed here with the more dour and anti-sex Christian tradition, you could say it’s both.

By the way, the skull she’s pressing against her lower belly is, tradition says, the skull of the late Jesus of Nazareth.

Is that healthy? Not really, but it is psychologically interesting.

The artist is (tip of the hat and thanks to Gretel, in the comments) Guido Cagnacci,  1663.