One of the cliches of Italian opera is that the baritone, who never gets the girl though he’s usually much better looking than the tenor, will at some stage sing a jolly and slightly misogynist song about women’s tears, and how women use them as weapons against men.

Men, he will sing, can stand up bravely to swords and spears, But are helpless against a woman’s tears, tra-la.

In rom-coms the man will give in on any point if the woman even appears as if she might be considering crying. She just has to pull out a tissue and he caves in. 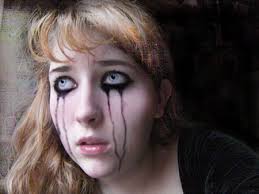 This is what mascara is for, really.

If delivering my first spanking was a hard thing for me to do, which it was even though the girl had demanded it, the first time I made a girl cry and then continued because she didn’t want me to stop was harder still.

I was taught that hitting a woman or making her cry was the lowest thing that a man could do. When submissive women started teaching me something different, which fitted my own desires, it set up a real conflict.

It took a lot of will to force myself to stay merciless to a crying girl. In the end, submissive women and my desires were bound to win that conflict, and they did. I’m glad I persisted.