I mentioned, back in Yikes #1, that I told a girl I was going to give her twenty-eight strokes of a thick wooden paddle. We’ll call her tintanabula. I think using lower case for a submissive’s name, in print, is faintly ridiculous and so does she. But that’s exactly why she gets lower case: who said a submissive is allowed typographical dignity?

I’m going to leap ahead in that story, and say that I took her out, naked in the night air, and cuffed her to a whipping frame, with her head down, looking into a forested river valley. She began shedding tears after about five strokes of the paddle, and then sobbing aloud, serenading the valley, after eight. As she began to sob, she could reflect on the fact that there were still twenty strokes to come, and wonder what state she’d be in by the time I’d delivered the full set. 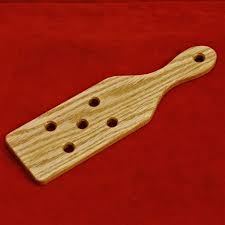 The paddle: one partner in a love-hate relationship

This is a girl who can take a dozen with the cane dry-eyed. Sore, but not usually crying even when she’s dramatically striped. So she hates the paddle, because it reaches her. It reduces her to nothing but a warm, helpless creature being beaten, with no physical or psychological defences.

I don’t have to use the paddle at all hard. A firm, controlled swing to bring it down across the centre of her buttocks, with not too long a gap for recovery between the strokes, will elicit a fresh outburst of pain and repentance every time.

I worry that tintanabula will come to love being paddled: all that helplessness, and the hormonal ride of pain. But in the meantime, it’s the implement to use when I want to punish her and be sure she won’t enjoy it.