This story is set in a small Japanese city in 1982. There are no cellphones, and no internet. There’s also no genital herpes (at least it hadn’t yet been heard of) and no AIDS. Some of the protection-less sex in this episode would be wildly irresponsible if it happened now, but at the time the main threat from unprotected intercourse was pregnancy. The contraceptive pill was used to prevent conception.

People about to have threesomes, now, are advised to be scrupulous with using and changing condoms, or else to find a time machine back to a period of lesser risk.

In the Realm of the Sensei 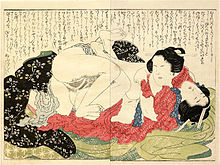 “I want you to fuck me now, and Yua too. Both of us, together.” Asuka had said. Seamus had objected, he thought reasonably, that he didn’t have two cocks, and Asuka had laughed at him.

She edged to be closer to Yua’s side, and put her leg over Yua’s, presenting him with two deliciously pretty pussies.

She said, “No, you can’t be in both of us at exactly the same time. But you can be fucking us both at once. Put your cock in Yua for long enough that she looks happy, and then you pull out and move your cock about … ” – she pretended to consider – “eleven inches to your left and put it in me and make me happy. Then Yua’s turn again. And so on. Do you think you can do that? Sensei?”

Yua nodded enthusiastically. That was all right with her. Seamus, a man with only one penis, but with the undivided attention and desire of two pretty girls, smiled. Happiness, he thought, not for the first time, is easy. He put his knees between Yua’s. She raised and parted her knees a little further, to welcome him. Then he felt his cock clamped in Asuka’s hand, and she pinched him painfully tight at the base. “Yikes. The fuck you do that for, girl?”

Asuka said, “I read it delays your orgasm. And you’re going to be in man-heaven. Double heaven. So you need to last.”

“Warned you. After this, Yua’s going to be able to film you getting the spanking of your life.”

Asuka grinned. That was hardly a threat. She said, “Hai, sensei,” with her best possible impersonation of meekness.

Then he felt Yua’s hand on his cock, soft, stroking. “I’d never hurt that lovely cock, sensei. So please fuck me now. In my cunt.”

Seamus leaned down, closing the distance between them, still with Yua’s hand light on his cock. She guided him to her pussy, and closed her eyes and sighed as he entered her slowly. He thought it odd that though he’d buggered her and she’d taken his cock in her mouth this was the first time he’d entered her pussy. Those events didn’t usually occur in that order.

She was a wet girl, and once he’d pressed forward all the way into her, their pelvic bones pressed together, she began to work his cock with a series of firm and rapid muscular constrictions.

Seamus kissed her, and she put her hands on his shoulders. She closed her eyes and squirmed while he pressed into her, then slowly withdrew and then claimed her again. She sighed and dug her nails into his skin. He smiled at her and smacked her face lightly. Then he held her face in his right hand. Her eyes opened. “I hurt you, Yua, whenever I like. And you do as you’re told. That’s the deal. You agree, Yua?”

“Hai, hai, hai, sensei …” Yua’s eyes closed again; he hadn’t stopped moving in her. It was too sweet, too warm, and wet and slippery and tight, and he couldn’t make himself stop if he wanted to.

“So you don’t scratch my back, Yua. You remember when I spanked you, with my hand, after I’d caned you?”

“Sensei.” She sounded reproachful. “You were so cruel.”

“And you came, little hypocrite. Anyway, if you scratch me, draw blood, you’ll get that again. But I won’t be letting you come, this time. So … don’t!”

“I don’t want to hurt you, sensei. But sometimes I don’t know what I’m doing. You’re good at making me know nothing. Teacher.” She let her head fall back, offered him her throat. Seamus kissed her neck, feeling an urge to bite, as she’d probably anticipated.

Yua put her arms around his back, and raised her thighs, so her body was nearly folded in two. She put her feet on his buttocks. “Fuck me, sensei.” 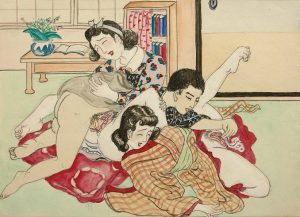 The possibility of coming in her alarmed him, and he concentrated for a second or two on his sensations, thinking about them analytically and therefore more distantly, until he felt that orgasm back off.

Yua had eyes closed still, and her mouth open. She made little high-pitched sounds.

Seamus rocked slowly to a stop, and she opened her eyes, as he withdrew gently. She breathed, “Umai sensei.”

He smiled as a man will when a woman calls him wonderful, and said, “Good girl. Back soon.” He put his leg over Asuka’s and Yua’s, and then both knees between Asuka’s thighs. He took Asuka hard, in a single and sudden thrust, and watched her face, wide-eyed, while he fucked her fast and rough.

He took a handful of her hair and pulled, hard. She showed her teeth; she liked that. As he took her, fiercely remorseless, she said, “What you – What are you doing to me?” 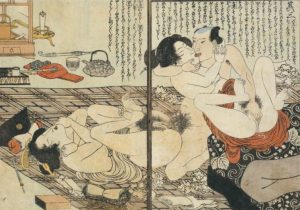 He didn’t answer, except to pull her hair harder, until pain showed in her eyes. She seemed utterly happy, though. So was he.

Then suddenly he smacked Asuka’s face, as he had Yua’s, and he withdrew suddenly, and climbed over and plunged into Yua.

Yua said, “It’s like both Asuka and you are fucking me.”He suspected that she’d prepared that. He plunged in her, pushing deep and hard, trying to hurt her, She said, when they’d moved together for a minute or so, “Yes-yes-hai, sensei, harder, sensei, fuck me.” That sounded less rehearsed. He kissed her.

He slowed down after a while, so they fucked sensually and affectionately. Perhaps lovingly, though that wasn’t a word he’d expected to apply to Yua. She rolled her eyes up and concentrated for several moment and then the contraction of her cunt resumed. 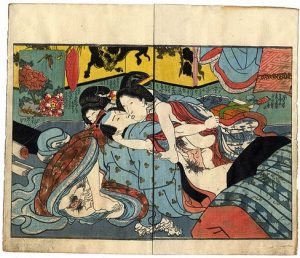 She was, perhaps, trying to show him she knew ways of serving that Asuka didn’t. He didn’t mind or care. Now he’d had the opportunity to make a direct comparison, he thought Yua’s pussy was perfect. So was Asuka’s. There were no comparisons to be made. It was true, and a safe thing to tell them when they asked, as he was sure they would.

Riding in the soft and perfect saddle of her spread inner thighs he pressed his cock deep so their pubic bones met again, and then simply applied constant pressure while he moved his hips, side to side, and higher, as far as possible while keeping his cock in place.

Yua said, “Uh!” She was lost. Things were building inside her. He kept up the pressure while barely moving his cock, and she said, “Uh,” again, and then made a series of nasal noises, and then lifted her pelvis from the bed, taking him with her, and wailed. Seamus fought for control, and managed not to come. He pressed the flat of his hand to her face where he’d slapped her, but now it was a gentle touch, in blessing.

Yua turned onto her side to watch as he lay between Asuka’s thigh’s and she began to sigh and squeak as he slid into her, her wet, slippery self welcoming him. As he began to pump his loved girl he felt Yua’s hand on his ass, pressing into the skin just behind his bollocks.

3 thoughts on “Wicked Wednesday: In the Realm of the Sensei 28”