Ruxana lay quieter than Nana had when I tongued her, and didn’t block my ears with her thighs. So I heard an amused feminine murmur and a stifled laugh. I frowned, though since my face was between her long, slender thighs, no one saw or noticed. 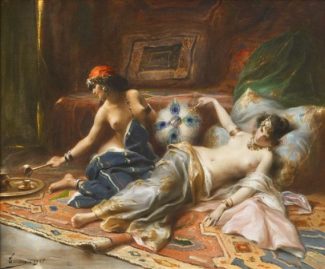 I guessed that Nana, Ruxana and I were making a show for some of the whores who I hadn’t chosen. There would be, must be, a peep hole somewhere that allowed them to watch. Then I decided that I didn’t care. I continued to pleasure Ruxana, who finally lost her relaxed posture, held my head tightly as if trying to wrench it off, and screamed to fill the room.

By the time she completed her climax, or series of climaxes, my manhood was once again standing in women’s honour and service. I rolled Ruxana over, and with gestures and a slap to her bottom encouraged her to present herself for me on her hands and knees. I admired once more that perfect bottom she had shown me when she posed naked with Nana, at the beginning of this encounter. I put my knees between hers and entered her, until that deliciously round and firm bottom pressed back firmly against me. 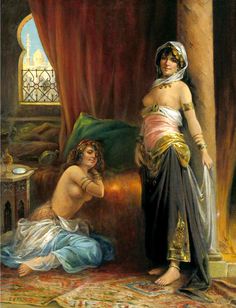 As I took Ruxana Nana came to stare into my eyes and press my nose between her breasts while I rode her friend. Ruxana and I were both well pleasured and well pleased with each other, and we moved slowly, unhurried, lost in the sweetness of skin against skin.

Nana sometimes pressed her breasts against my face and sometimes lowered herself to kiss my mouth. Though I was riding Ruxana, I couldn’t help wishing there was some way of taking Nana with me into Persia.

But Ruxana suddenly released her breath hard and then held her next breath, working her bottom hard against me. I only had to keep still, presenting, while she worked her way to her third climax. Her arms had collapsed and her face and breasts rested on the bed. She looked up at me, eyes half closed, smiling. She said, “Yavrucuq.”

Of course I did not know the word, but I said, “Yavrucuq” back to her, and then to Nana, and we all three laughed delightedly, pleased with ourselves for having one word in common, and that an endearment.

Nana took Ruxana’s place, and I soon found that although I was exhausted she demanded a rougher and more energetic ride than Ruxana. But when we had both spent I knew I really was exhausted beyond recovery. 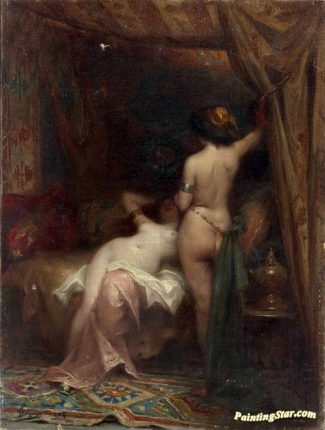 I told them they were most beautiful, and if it were possible I’d take them both with me to Persia, and they listened and kissed me at random moments since nothing I said made any sense to them. Except in my tone of voice, which is part of that universal language that cannot be translated and needs no translation.

So when I rose from the bed they scrubbed me again, and kissed my manhood again, addressing me and it as yavrucuq before letting it be clothed.

They said other things to me that I no more understood that they had understood what I had said to them. But it was clear that I’d be welcome, should I ever return to Baku.

We embraced each other, and they withdrew through a door I hadn’t even noticed at the rear of the room, leaving me to return to the ante-room, where Sorouf sat with his girl, conversing and drinking something green.

(I’m afraid that’s all there is, of orientalist erotica. For now, anyway.)