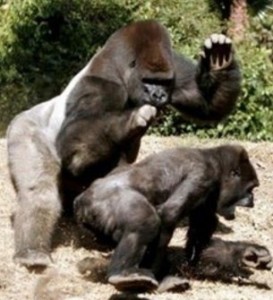 We know that submission postures and the reddening of the genitals and buttocks are common to chimps, bonobos and humans. In humans the submissive presentation posture is a universally recognized sexual signal.

We know that that red sexual display died out in our hominid ancestors some time before we homo sapiens sapiens turned up, but we really don’t know when.

The fossil record is a long way from complete, and fossils mean bones, not flesh. Flesh decays, so we don’t know what our ancestors’ asses were like.

Presumably that red-hot perineum flush would have started to be less important in reproduction, and slowly die out, some time after our ancestors took up walking while standing up.

When you’re on your hind legs, your ass isn’t as prominent as it is when you’re on all fours, so a reddened ass is less effective as a sexual signal, and over time it will stop being selected for. But we don’t know when that was.

That guy, he really wants dimmer lights and a gold chain.

Meredith Small, in her book, Female Choices: Sexual Behaviour of Female Primates, argued that male primatologists had often failed to observe what female primates were doing.

They interpreted primate sexual behaviour in terms of competition to be an alpha male, with the assumption that the alpha male had his pick of all the ladeeze.

It took women primatologists to see that female primates were initiating a lot of the sex, and that they, not some phalanx of alpha males, were choosing their partners. And they weren’t necessarily choosing the alpha males.

When chimps and bonobos are in conflict, getting close to a fight, and one of them assumes a submissive sexual position, the other primate may drop the aggression, and mounts the submissive. They rub genitals, and sometimes have sex.

Most primatologists have written that as if it’s a win-lose encounter. At least the submissive doesn’t get bashed up, but he or she is humiliated and defeated.

The rewards for the dominant primate who “wins” the exchange are the most obvious: there aren’t many of us primates who don’t enjoy triumph, power, sexual access, and so on.

But the submissive primate is also rewarded: fear turns to relief, anger turns to sex, and conflict, through the mounting, turns to connection, with the associated pleasure of sexual surrender – a pleasure that seems to be enjoyed by many animals as well as humans.

Both primates are highly aroused by the time their pre-fight postures change to sexual postures. The submission allows them both to channel that arousal into sex. The sexual presentation, the mounting, the thrusts, of primates aren;’t just symbolically “like” sex. They are sex.

That position, and its aftermath. Fight or fuck? No contest.

Chimps and bonobos are highly sexed, and they enjoy a wide range of activities among their own and the opposite sex. So do we, only more so. They, or rather we, are all polymorphously perverse.

There’s a reason this bdsm-like behaviour, and pleasure, can survive and pass its way down to modern humans.

Another factor is that primates with that ability are sexier: their sexual repertoire is slightly wider, and so they are likely to mate slightly more often. Throw in a couple of million years, and that will make a difference. Regardless of the mechanism by which it’s transmitted, that is, whatever the mix of genetic and “cultural” factors, the ability to sexualise dominance and submission seems to be part of our primate inheritance.