I’ve told the preamble to Diane’s birching at some length and detail, from first meeting her to getting her home, tied naked over a bench, with a birch assembled with twigs from the local park.

I’ve been putting off telling the actual birching part of the story, because while what happens during a whipping is immensely intense as an experience, it tends to make poor literature. All too often it turns into something that looks like Victorian flagellation pornography, all onomatopoeia and exclamations. 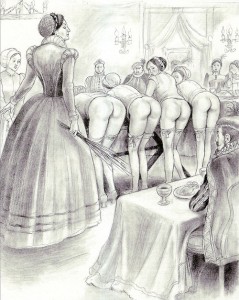 So I’ll just report that I started Diane with about a dozen strokes, and she wriggled and coloured nicely under the birch.

Though I was turned on, and though she was a wet girl when I applied the finger test, I realised that I was going to have to apply the birch much harder if I wanted to break her skin.

So I doubled the strength of the strokes. I had been swinging the birch like a cane, but I began to use it more as a whip, with a twist of the wrist just before the impact, so that the twigs lashed across her buttocks and thighs at very high speed. After a dozen in that style, Diane was writhing in pain. She was weeping, and she wailed that it really hurt. I believed her. And I continued, just as hard. 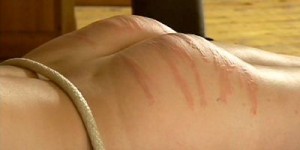 After thirty hard strokes she was wailing more or less continuously. It wasn’t really loud enough to wake the neighbours or have the cops breaking in the door, but her howls did fill the room. I loved the way she sounded: it was similar to the noises she made when she came.

Still, although I was enjoying myself, I had to watch her carefully. She wasn’t going to use the safeword, but I was still worried about the strokes being too hard. I prefer knowing for certain that the submissive is safe, physically and emotionally, but I couldn’t be so sure in this situation. But the truth is that as her whipping got harder I got more focussed on her safety than on the things I usually enjoy. I was less comfortable and my cock got softer.

So I let the birch wrap round her hips and the sides of her thighs. I generally try to avoid that, because the part of any instrument that lands on the further side of the target will hit the hips or thighs at ten or twenty times the force and speed of the part of the instrument that hits buttocks or thighs directly.

Finally, after delivering a series of lashes in which I left six inches or so of the tips of the birch to slash onto the skin on the further side of her buttocks, I got a yowl from Diane, and, at last, a couple of spots of blood on her hip. One of them trickled.

“So,” I said, as if I’d been lusting for that, “you vampires do bleed.” (I’d thought about that line. It sounded ridiculous to me, but I guessed that she’d like to hear it.) I scooped up a smear of her blood with my index finger and held it to her mouth for her to lick. She was joyous.

The act of collecting that spot of blood revealed that the cut was tiny, less than a paper cut and probably not as painful. Blood refilled the tiny gap in her skin, but didn’t well up or overflow. The trickle stopped.

So I gave her another dozen, as hard as I could, because I knew Diane was deep in subspace, and close to coming. I got a few more scratches and a bit more blood – enough to keep Diane happy, since I threw in a lot of rhetoric about how the blood was flowing down her thighs. It wasn’t, but I didn’t let her see whether that was true or not.

When I put the birch down and gave her three fingers in her cunt, it took her about twenty seconds to her first orgasm, and that orgasm, or the series of them, went on for a couple of minutes.

But there’s a psychological limit to how hard most people can whip another person. I’d reached mine. We’d also got close to the physical limit of what that birch could do. I’d swung it hard and fast, and  I didn’t see how that birch could land much harder.

I had a happy vampire girl, who wanted another hard birching straight away. (I told her she didn’t deserve it.) She wanted more. Me, I’d had an interesting time and parts of it had been hot, but I wanted less.

It had been an experience and I like experience, in general. And I’d delivered something that Diane had wanted. A dom should try to deliver what a submissive wants,though we like to do it in a round-about way so she doesn’t feel in control.

But it turned out that drawing blood is one of my limits.