But I didn’t pick up the birch. I took my belt off and folded it, then held it to Diane’s mouth. She kissed it, but frowned, puzzled. “To warm you up before I birch you.”

“It’s better for you. Are you in a good position to argue with me?” 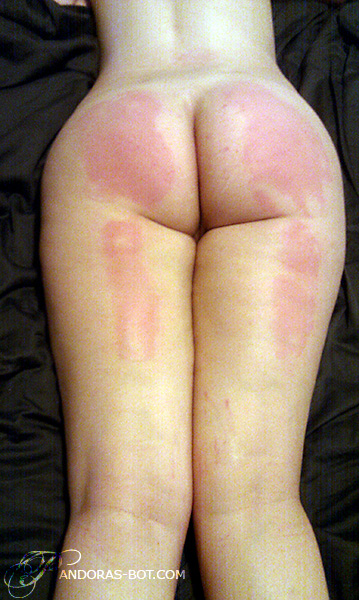 I straightened up quickly and lashed the belt down, hard, onto her right thigh, on taut skin a couple of inches above the knee. It sounded like a starter’s gun, and a bright red band formed almost immediately. Diane writhed, as far as the rope would allow, and howled shrilly. The neighbours would have had to be listening to pay it much attention, but she was in good voice. If I wanted to make her serenade the whole street, she would, with just a few more strokes like that.

I began to strap Diane’s bottom and the plumpest part of her thighs just below the crease. I applied the belt leisurely, swinging its looped weight down onto her with an overarm stroke every twenty seconds or so. I kept the strokes hard but not as hard as the one I’d placed on her lower thigh. Diane relaxed, happy enough to be belted, while her bottom glowed pink, then red.

After twenty-five strokes she was beautifully and brightly red, her skin hot to the touch, and – when I applied the high-speed finger test to her cunt – sweetly, slickly wet.

I smacked the belt down between her thighs, to catch meatily against her opened cunt. Diane was silent, as she had been for the other strokes to her bottom. But her mouth formed an O and she held her hips up, hoping for another.

I stepped in front of her so she could see me smile at her, and watch me put the belt back on. “What do you say?”

I reached down and caressed her hair, then put the fingers of my left hand into her mouth, as a reward. Diane sucked earnestly, running her tongue along each fingertip in turn.