Diane walked towards me, carrying a length of ash twig that bore its own load of emotional and sexual meaning, since I’d said I was going to whip her with it. And because those words still echoed a bit, and her cunt, exposed by her unbuttoned shirt, was cool in the night air, getting closer to me with every step, her confidence faltered. She wasn’t quite happy by the time she stood in front of me and handed me the switch. 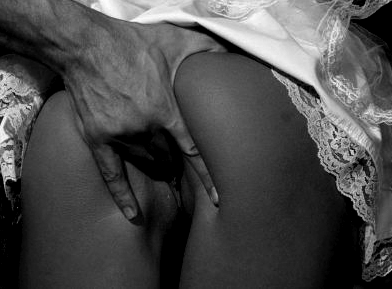 I took it from her and told her it was a good piece, well chosen. Then I put it down, leaning it against my leg, and gathered her in, one arm round her waist and one hand patting her ass. Cold bottom it was, and nicely curved. Pat. Pat. Then I slipped my fingers back into her.

She exhaled. But she was still frowning.

I said, “It’s okay. You look absolutely beautiful. And you’re even sexier than you were thinking you were, when you picked this up.”

That got a little laugh from her, and I felt her body relax. “Diane, some girls like it – even if they’re going to get a whipping – some girls like to be told when they’re being a good girl.”

“Just so they know they’re not getting a whipping because I think badly of them, and I’m not angry with them. On the other hand, you could, um, make a case that it’s a fucking patronising thing to say.”

She laughed again. “Oh, could you? On the other hand, it’s a perverted thing to say.” She spoke into my shoulder, roughly where she’d bitten me.

“So, do you want me to tell you when you’re being a good girl?”