There’s an idea that the Greeks and Romans were cheerful, sex-positive pagans, whose cultures recognised and celebrated the sexual being and power of women, and it was Christianity that came along and made everything maudlin, misogynist and miserable. 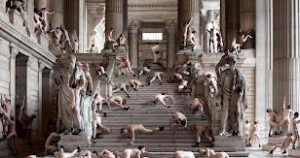 The pre-Christian Greek and Rome cultures had their puritans and their women-haters too. The social position of women didn’t get any worse when Christians rose to political power.

But, having acknowledged all that, there are ways in which the pre-Christian Greeks and Romans are much to be preferred to their (as they became) Christian overloads. For one things, the Classical Romans never called cunt “shameful”. Their word was “cunnus”. “Pudenda” starts to appear, as a disparaging word for genitals, but especially for women’s genitals, after CE300. That is, after Christians had taken over the Empire.