The message was from Margaret Dick. The family business, by now about 127 years old, had descended to her. She said she’d be pleased to supply a traditional John Dick’s tawse. They had two models available, a heavy tawse, two-tailed, using a very thick piece of cowhide, and a lighter model. Would either of those suit?

This was great, I wrote back. I’d probably want the heavier one, if that was the one that was actually used in schools, the one with a bit of history to it. But I was leaving Scotland in the morning, which would be Saturday, so would they be open? Would I be able to come to the factory, perhaps, to pick it up?

No. It wouldn’t be possible to let customers visit the factory for insurance reasons. 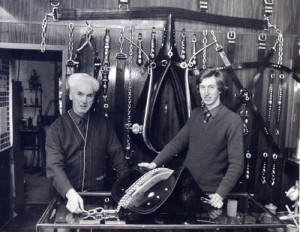 John and Malcolm Dick, in the 1980s, with not enough of the saddlery on view.

That was a pity. I’d hoped to take a sinister photo of tawses hanging on the wall and lying on tables in various states of completion. A photo to make a submissive’s blood run cold. Still, they were running a leathergoods factory that made bags and belts and other non-pervertables, and they were probably sick of the tawse enthusiasts mooching around, dressing as schoolgirls and breathing in the leather. That’d be reason enough for keeping the factory off-limits.

I said what a shame that was, since I’d come so far…?

So she offered to meet me in a tea-room in Cowdenbeath, a town a few kilometres from Lochgelly. She’d bring both the tawses, because I hadn’t yet decided which model to go for. That was very nice of her.

Girls in Rome, and a tawse

Next morning I got up early. I’d dreamt about Gemma. In the car, driving south, I thought about her some more, naked on her knees, her face and breasts pressed to the sheet, ass up and glowing hotly. And I hoped happily. I’d have to make that happen, and not give her the option of getting nervous. I’d have to get to Cowdenbeath by 9.00 am. I put my foot down.

I was a little worried about having to explain this to a  Scots traffic cop: “Sorry, officer, I’ve got to get a tawse for a girl in Rome. She needs one. Yeah, a tawsing, strictly speaking. Course I’m in a hurry.”

But I got to Cowdenbeath on time and uninterrupted. Margaret Dick was in the tearooms, as advertised, with a couple of neat and tidy packages, long, slender and wrapped in gauzy paper.