It seems I’m slowly building a saga about tawses. You might want to go back and start with the first episode: The Tawse’s Tale #1.

But I haven’t been completely free and open with my readers. I said I wanted to get a tawse simply because I was in Scotland.

Similarly, if I go to South Africa, for example, I’d buy a sjambok, partly as a souvenir, and partly as a good, sinister-looking thing to smack on a bedspread and make a bad girl jump, though I’d be fairly careful when actually applying it to girl-skin.

Anyway, Scotland was the place to buy a tawse, but I was also looking for a tawse because I intended to use it on the bottom, and the backs of the thighs, of a specific girl.

She’d also told me that when she was at school, some teacher had tawsed the backs of her legs, hard enough to split the skin and do lasting damage. I was shocked. I thought about that man, and how if I ever met him I’d explain why I was about to punch him repeatedly, and then I’d punch him repeatedly. Though that was only an angry fantasy. In reality he’d be old and pathetic now, and there’d be no point.

Anyway, hitting adults is mostly pointless, but hitting children is evil. Evil was done to a girl I was falling for. I wanted to repair it. You can see where this is going. 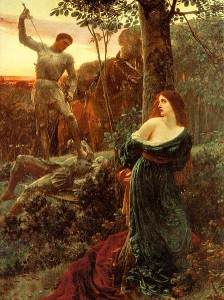 When rescuing a damsel, put your spear in the bad guy and your cock in the damsel. Spear goes in bad guy, cock in damsel. Spear in …

I was going to bring a tawse to that specific girl in Rome. My idea was that if you have a bad experience that stays with you as a bad memory, a memory so bad that it has lasting power over you and perhaps even effects and limits the way you live your life, you can make changes to that memory. The best way is to overlay a new experience on the bad one, so that the new experience will be triggered by some of the same cues as the bad memory. But the new memory is happy, pleasured, loving, sexy.

That sounds silly, but I’d had some experience with it. A couple of submissive women I knew had previously asked me to help them re-enact certain bad things, to take them through it safely. I’d agreed, and gone carefully, and it had worked to take the fear out of certain memories, and certain things that used to trigger panic attacks lost a lot of their negative power. So my experience was that reliving bad things was risky, but potentially rewarding.

I thought I might tawse this girl when she was glowing and pleasured, and if I did it lovingly and at a level of intensity that I thought she could take and use for pleasure, then I might undo some of the damage done by that stupid and vicious teacher.

So that’s the real background. I was going to tawse a girl in Rome, probably after I’d buggered her. She’d be the first girl I’d ever tawsed, so we’d each be shedding a virginity, of sorts.

I hadn’t told her all of this train of thought, but I had told her about the time the former Goth shop in Edinburgh failed to sell me a tawse. I got an email from her in response.