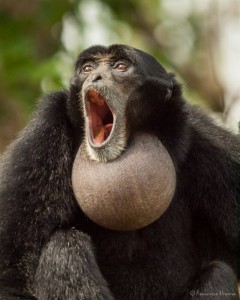 I have heard the Siamang sing. They don’t sing to me (well durr, Mr Prufock) but they sing for sex and joy.

I had the memory of Maureen’s screamed pleasure and then my own, even as I’d deliberately hurt her and then fucked her with none of the consideration that my lovers had so carefully taught me.

Her skin still burned under me. I pressed tight against her back, revelling in that heated proof of my own violence. I was still hard in her and I wasn’t tender-hearted yet. I hoped she still hurt, and I was certain that the hurt felt good to her.

My sweat had pooled below her shoulders and in the small of her back, and spilled down her sides, soaking the sheet. Even then, Maureen was cooler and more elegant than me. I could see the left corner of her mouth, curved in a smile. We were comfortably silent.

This was a world where previously unattainable pleasures had suddenly and somehow become possible. Maureen had cried out in the same joy as me, or a version of it. Incredibly, I had a partner in this. It could happen again and surely would. I held her and was held. She was extraordinary, and real.

Then I felt doubt. In this new and undoubtedly wonderful world it seemed that I sometimes beat her. As I’ve mentioned, I hate men who beat women. As our silence continued, Maureen’s smile faltered. She’d just accepted a beating from a man. More, she’d invited it and had just been screaming her joy at it.

There were uncomfortable thoughts for her to have about that. If a man who hits a woman is as low as a man can be, then what kind of a woman could she be, who had enjoyed that treatment and who lay contentedly with the man who’d inflicted it? I knew that she felt troubled, as I did, and that we had to talk about this.

But I couldn’t find the right words.