If someone bruised me deliberately, I’d expect that I’d have bruised them too. Since I don’t enjoy fighting, let alone getting hurt, I’d be angry both about getting hit and being put to the necessity of punching someone. I’ve had only about four physical fights in my life, and I’m just as annoyed at being pushed into the ones I “won” as the ones I lost.

There are movies in which two guys have a fist fight and then become best friends, but that could never be me. I just get pissed off that I’ve been pushed into something scary and painful, where the best outcome, “winning”, is sour. Hit me and you make an enemy. 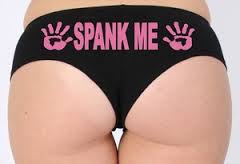 But when a submissive woman takes a spanking or a flogging from me, I don’t think I’ve ever encountered hard feelings. Sorrow, maybe, if I’ve given a punishment, but the most common feeling I’ve had fed back to me when I let her up, and in the morning after, is pleasure, either calm and satisfied, or giddy and cheerful like Sa’afia.

Um… I think I was going to say something more complicated than this. Anyway, it’s amazingly fortunate that there are both dominants and submissives, since we need each other.