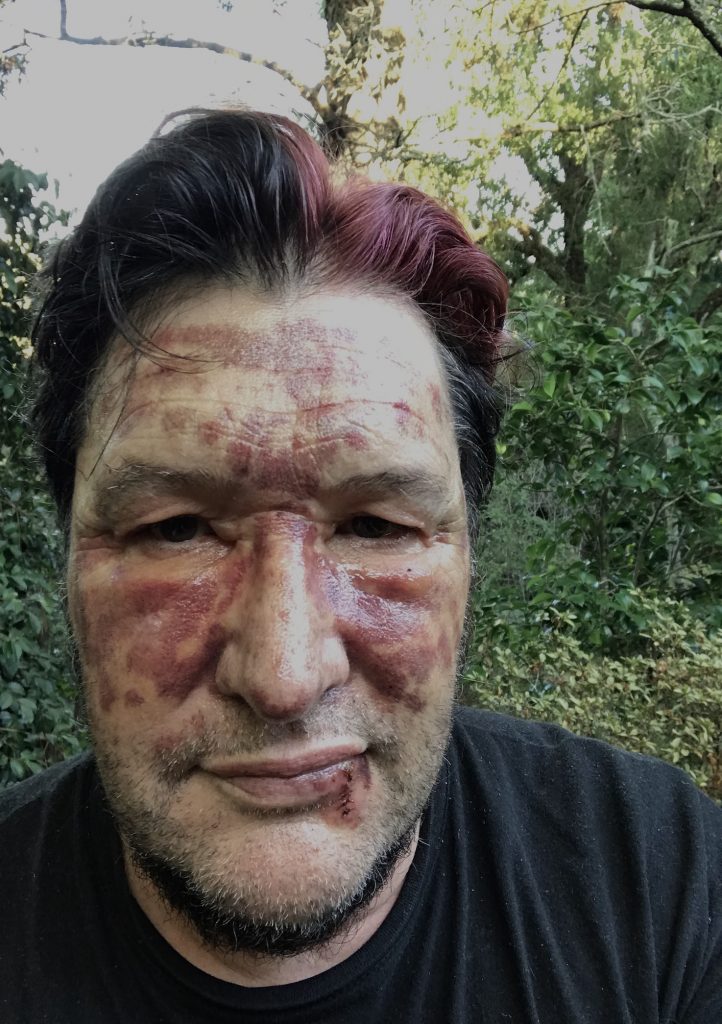 People seeing this photo, which I took about five minutes ago, will think I look terrible. They’re right, I do.

But I think, “This is me just four days after scalpel surgery and then laser surgery on my face, and I’m recovering very fast.”

I think that because I’ve spared people the photos of me on days 1, 2, and 3, when my face looked like I’d been beaten up by the secret police, then pushed out of a car at high speed, then dragged by another car, and then rolling into the gutter, where people kept kicking my face for what must have seemed to them to be good reasons of their own.

Day 1: I looked reptilian, because the flow of lymph fluid puffed up my face, and blew up the pouches round my eyes so I could barely see out of them. Mostly couldn’t see out of my right eye.

Day 2: The eye stuff had drained a little into the rest of my face. The rest of my face now looked like it had been inflated with a bicycle pump. I looked pig-like, though I was happy with that because at least I’d re-joined the mammalian order.

Day 3: I looked dead. You know the annoying guy who’s the first to meet the aliens when they land on earth, and they kill him and use his animated corpse to pass on threatening messages and generally do their work? I looked like him, the deranged evangelist whose rotting face makes dogs howl and children scream and run.

My nose was black, and swollen in an odd way that made it look like it’d fallen off and been hurriedly stuck back on with glue. Still, at least now I was back to looking human.

Day 4: Here I am. It looks nasty, but believe me, I’ve been looking at worse, lately. I feel about half-way back to being myself. The face colorisation is still weird, but most of the swelling’s gone, and the discolorisation is starting to fade, a little.

My face is shiny because I’ve rubbed a lot of haemorrhoid gel into it. The gel contains steroids to help repair, and has a mild anaesthetic effect. So you don’t have to stick haemorrhoid cream or gel up your ass; it has other uses.

For the cancer op scarring under my lip, I’m using a light silicon gel as a wound dressing, as it’s supposed to reduce scarring.

Yesterday, the surgeon called me and said they got it all. I’m at the lowest possible risk of having to have more taken out later. So that’s good.

Healing is hard work. I’ve just slept most of the way round the clock. I have so much to do, and no energy at all.

How do I feel?

I’m not in pain, or not much pain. I feel better than I look.

I’m taking steroids, on medical advice, to speed the healing. I’m finding that they fuck with my sleep, which is probably one of the reasons I’m so tired now. I was also prescribed codeine, and I think from now on I’ll use paracetamol during the day, and the codeine at night to help me shut down.

I’m relieved the cancer thing is over. Though I mostly just shelved thinking about it, and never worried all that much. So life rewards irresponsible insouciance, sometimes.

I’m grateful to the people who care about me and even manage to love me, and to science and the medical profession. I’m kind of amazed that I’m not more unhappy about all this, but the thing is, I can see an upwards path and I feel pretty positive.

And if you’re going to Eroticon, I’m looking forward to seeing you in about a fortnight. By then I’ll have a new face, or rather my usual one back.

4 thoughts on “State of the author: stuff I don’t usually talk about”